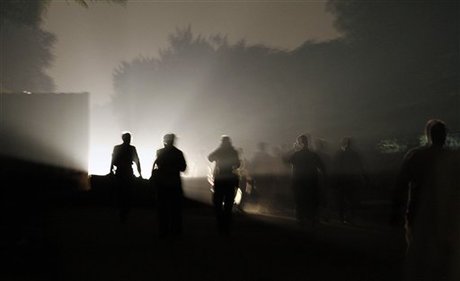 The attack happened in the border village of Lawara Mandi, 60 kilometers (40 miles) west of Miranshah which is the main town in North Waziristan tribal district, where the Pakistani military has been fighting to destroy longstanding bases of the Taliban and other militants.

"U.S. drones fired two missiles each at a compound and a vehicle and at least eight militants were killed," a senior security official told AFP on condition of anonymity.

"There are two Uzbeks among the dead militants identified so far," the official said, adding that the vehicle was near the compound when missiles hit it.

Security officials in the neighboring garrison town of Bannu and Miranshah confirmed the drone attack and casualties and said it happened at around 3.30 am Wednesday.

"Pakistan regards such strikes as a violation of its sovereignty and territorial integrity," it said.

"The Government of Pakistan also believes that with the decisive action being taken against terrorist elements in North Waziristan, there is no need for such strikes. We, therefore, urge for a cessation of such strikes."

Pakistan's semi-autonomous tribal areas on the Afghan border have for years been a hideout for Islamist militants of all stripes -- including Al-Qaida and the homegrown Tehreek-e-Taliban Pakistan (TTP) as well as foreign fighters such as Uzbeks and Uighurs.

Washington pressed Islamabad for years to wipe out the sanctuaries in North Waziristan, which militants have used to launch attacks on NATO forces in neighboring Afghanistan.

The assault by Pakistan's military was launched in mid-June after a dramatic attack by militants on Karachi airport, which killed dozens of people and marked the end of a faltering peace process with the Pakistani Taliban.

More than 1,000 militants and 86 soldiers have been killed in the assault so far, according to the military. The area is off-limits to journalists, making it impossible to verify the number and identity the dead independently.

Pakistan routinely protests against U.S. drone strikes, which have been targeting militants in the tribal areas since 2004, saying they violate its sovereignty and are counterproductive in the fight against terror.

But most analysts believe the resumption of the drone program after it was suspended -- reportedly to give Pakistan space for negotiations with the Taliban -- is evidence of collusion between the two countries.

The Islamabad government and military officials strongly deny this.

The military assault has forced more than 800,000 people to flee North Waziristan, with most ending up in the nearby town of Bannu.

There have been fears that many top militants also fled, including fighters from the feared Haqqani network which is blamed for numerous bloody attacks in Afghanistan.