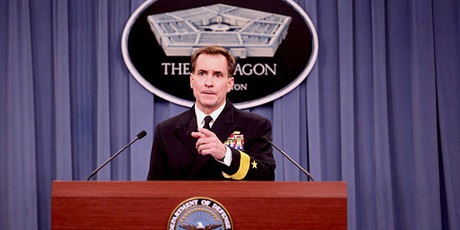 The Pentagon said Thursday it will investigate reports that civilians were killed in U.S.-led air strikes in Syria this week but insisted the raids were carried out with precision.

The U.S. military said its bombing raids were carefully calibrated to avoid civilian casualties and touted the role of coalition partners from Saudi Arabia and the United Arab Emirates in the latest strikes in Syria on Wednesday.

"We are aware of some reporting out there that there may have been civilian casualties, and we are taking a look at that," spokesman Rear Admiral John Kirby told reporters.

"I would add, though, not as a caveat, but just to be completely transparent, we don't have any credible operational reporting through operational channels that would sustain those allegations."

Kirby said the U.S. military goes to "great lengths and great care to prevent collateral damage, and certainly any hazard to civilian populations."

However, the Syrian Observatory for Human Rights, a Britain-based monitoring group, said Wednesday's raids against oil refineries held by the Islamic State (IS) group in eastern Syria killed 14 militants as well as five civilians, including a child.

Recounting the details of Wednesday's round of strikes, Kirby said Saudi and UAE warplanes played the leading role in the attack on the oil installations, devoting more planes and dumping more bomb tonnage than American forces.

Ten warplanes from the two Arab states flew with six U.S. aircraft in Wednesday's raids on oil refineries held by the IS group. And 80 percent of the bomb tonnage was delivered by the Saudi and UAE planes, Kirby said.

In the first air attack in Syria early Tuesday, the majority of strikes came from U.S. Tomahawk missiles and aircraft, he said. But Arab coalition aircraft also took part in the raids, comprising half of the planes in a third wave that first night.

The strikes against 12 targets hit the majority of IS-held refineries but the extremist group still controlled several other refineries, he said.

Showing reporters before-and-after photos and video footage of a few bombing runs, Kirby said the refineries had clearly been damaged.

"They're not going to be using these refineries for some time," Kirby said.

But he added that the bombardment was designed to avoid "obliterating the refineries off the face of the map" so that a future government could some day use the facilities.

The wider air campaign was launched early Tuesday, extending U.S.-led air strikes into Syria after bombing IS militants in Iraq since August 8.

Obama has ruled out a major ground force but has approved the deployment of more than 1,600 troops to Iraq to protect U.S. diplomats, advise Iraqi government troops and coordinate the air campaign.

Kirby said 200 soldiers from the U.S. Army's 1st Infantry Division have been ordered to Iraq as part of the 1,600-strong contingent, with another 300 troops from the same division deploying to the region -- but outside Iraq.

The air raids in Syria have struck one of the Syrian regime's main adversaries, but the Pentagon said there had been no military coordination with President Bashar Assad's army.

Kirby also said there was no sign that Syrian regime forces had tried to move into areas where the U.S. and coalition aircraft had bombed.

Despite "dramatic" footage of the strikes, Kirby said it was too soon to draw any sweeping conclusions and warned it would be a long, difficult fight ahead.

"This is not a short-term effort. And nobody here in the building is taking anything but a sober, clear-eyed view of the challenge in front of us," he said.

The IS group has seized large parts of Iraq and Syria, declaring a Muslim "caliphate" and imposing its harsh interpretation of Islamic law.

It has committed widespread atrocities including mass executions of captured Iraqi soldiers, forced conversions of non-Muslims and carried the on-camera beheadings of Western hostages, including two U.S. journalists and a British aid worker.