FBI Believes It Has Identified IS Hostage Executioner 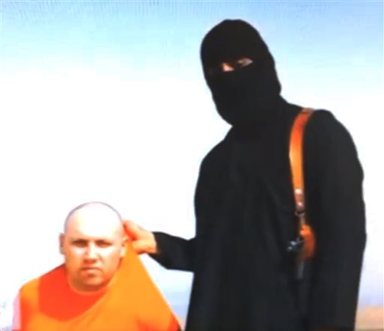 The jihadist organization triggered global outrage when it released videos of a man with a British accent killing first James Foley then Steven Sotloff, freelance journalists who were kidnapped in Syria.

"We believe we have identified the executioner," Comey told reporters at a briefing in Washington. "I won't tell you who it is."

The British ambassador in Washington, Sir Peter Westmacott, had previously said that the allies were close to identifying the suspect.

Comey did not confirm or deny reports that the suspect in the killing is British, but said the FBI was concerned that another film from the Islamic State group features someone with a North American accent.

It features a masked militant in combat fatigues speaking in English.

"There's no doubt that there's someone speaking with a North American-accented English on that video, so that's a big focus of ours right now," Comey said.

In addition to murdering two U.S. hostages and a Briton, the Islamic State group has seized a large tract of territory spanning eastern Syria and northwestern Iraq, in a brutal and bloody campaign.

On August 8, President Barack Obama ordered air strikes against the group in Iraq, and this week expanded the campaign -- backed by Arab allies -- to hit IS targets across the border in Syria.

U.S. authorities expect a long conflict against the group of at least three years, and have expressed concerns that hundreds of Muslims from Europe or the Americas have joined the group.

There are fears in Western capitals that battle-hardened fighters may return from the field and launch attacks in their homelands.