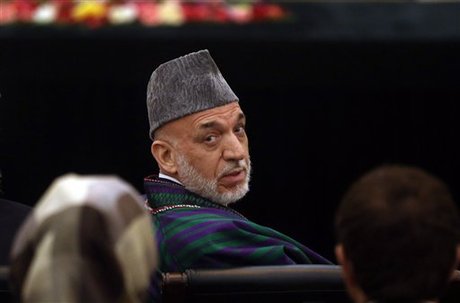 Former Afghan president Hamid Karzai may have brought development and relative stability to major cities, but an insurgency-wracked countryside and sky-high corruption levels mean that for many ordinary citizens he leaves behind a mixed legacy.

His successor Ashraf Ghani was sworn in this week after a prolonged and fraud-tainted election process came to an end, with Karzai using his final speech to take a parting shot at the United States.

It was a far cry from 2001 when he was appointed head of an interim government by a U.S.-led military coalition, marking the end of the Taliban's five-year reign of terror.

The country had been decimated by more than 20 years of war, but hopes were high for a new chapter in Afghan history.

The West, which desperately wanted a progressive ruler, saw the suave Karzai as the right man for the job, as a member of the majority Pashtun ethnic group that has dominated Afghanistan through most of its history.

He was elected president in 2004, once more in 2009, but was constitutionally barred from contesting it for a third time.

In the streets of Kabul where he was at times jokingly referred to as "mayor" for his lack of control over large swathes of the country, residents offered a range of views over his record.

At the Golden City, a neighborhood built from scratch during the Karzai era, 38-year-old tailor Tareq Hashimi said the former president had done well to maintain peace between ethnic groups that had fought each other throughout the 1990s.

"His policies were good because he has been supporting all the ethnic groups, not only the Pashtuns."

Not far away, 28-year-old businessman Safiullah Caravan was overseeing his latest construction project. Speaking from among a group of laborers who are cutting steel bars, he said over the past few years his company had been "busy with a lot of contracts".

"Under Karzai it was easy to get some work and make money," he said.

Hashimi confirmed that the "first seven or eight years were good. But at the end it became harder."

The past few years have coincided with the gradual retreat of the international military presence, Taliban territorial gains and a major deterioration in relations between Karzai and Washington, which has been the country's main ally and aid donor.

During a farewell event on Sunday, Karzai, 56, recalled that Afghanistan "didn't have a flag, money or infrastructure" when an international conference in Bonn handed him power in 2001.

Under his tenure, major Afghan cities have become more developed, school enrollment rates have shot up, particularly for girls, and access to healthcare has increased.

But corruption remains endemic, insecurity -- which was limited under the iron-fisted Taliban regime -- has increased, and the cultivation of opium has exploded.

Zia Dasht, the 43-year-old head of a youth group, criticized Karzai for leaving behind an unstable and corruption-ridden country. "His presidency boiled down to mismanagement," he said.

After several years of relative harmony in his relationship with the U.S., which earned him the nickname of America's "puppet" among the Taliban, ties between Karzai and Washington began to fray in 2009, culminating in the president's refusal to sign a deal allowing foreign troops to remain in the country beyond 2014.

The accord was instead signed by Ghani this week.

Karzai told government officials in a public speech last week Washington had waged its war for its own ends and without regard for civilian casualties, and advised the next government to approach the relationship with the U.S. and the West with caution.

"We can be friends with them, but we want equal benefits," he said.

Bette Dam, author of a recent biography on Karzai, says he was partly a victim of misguided U.S. policies in the country.

"The U.S. failed to understand Afghanistan. They chose the easy way by working with the warlords, who got all the contracts with the Americans."

This went against Karzai's wishes, she said, adding that the strategy helped create a political framework based on "patronage" which led to much of the corruption that Washington later punished him for.

For Davood Moradian, director of the Afghan Institute for Strategic Studies (AISS), Karzai succeeded in "unifying the political elite", but leaves to his successor a "dysfunctional state and institutions".