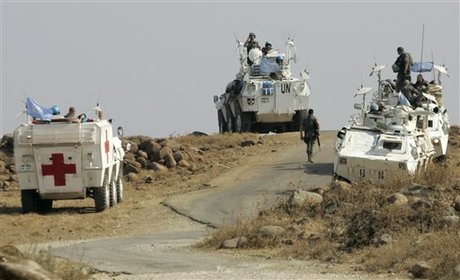 The army ended an overnight clash that erupted between a French Patrol in the United Nations Interim Force in Lebanon (UNIFIL) and a number of youths in the southern town of Aita al-Shaab, the National News Agency reported on Wednesday.

A number of youths assaulted the French patrol and pelted it with stones on Tuesday night after blocking its way, the NNA said.

The army interfered immediately and ended the assault, it added.

young "resistance" fighters against the "zionists"...what a farce !

Every time they send orphants, widows, and elderly men to confront the UNIFIL, an arm cache shouldn't be far away! These youths should get their ass kicked big way, and return to school or whatever they're supposed to be doing! Enough of this soap opera production! The butane containers explosions is a worn out story. And the honor of the confronting women used to shield arms and thugs hideouts too! We'll know soon what's the real story behind this carefully planned 'incident'!.

no worry, they will send more experienced fighter against your filthy zionist militia

These are not your normal school children youths who go to school and listen to lessons in morals, math, geography and classical music.... They are the Shiite thugs that form the backbone of Hzibullah and Amal. Mr. Berri has recently promised to protect the UNIFIL (Notice how UNFIL now needs protection from thugs.....)..... what a farce! IMO the UNFIL should withdraw from the south coz it is a conflict of civilizations: one of respectable people and another of barbarians ( Nawar and Hamaj)....! Let's then see how these so called youth will pelt the storming F-22 fighter jets over their heads.....

if youth feel they can throw stones today..... what will they feel entitled to do tomorrow? resistance = lawlessness ?

For over 60 years the same song and the same story.
These kids to be later uneducated, unemployed will continue to do the same based on upper hands orders and end up nowhere and being nothing....
Sad and effective brainwashing.

Will that continue for another 60 years and no result ???

@mowaten: seriously???? are the stone-pelting youth that you're supporting your own children? barbarians at best.

Crusaders get off Muslim land!!