Report: Aoun Slams Talks on Presidential Elections, Refuses to Back Down 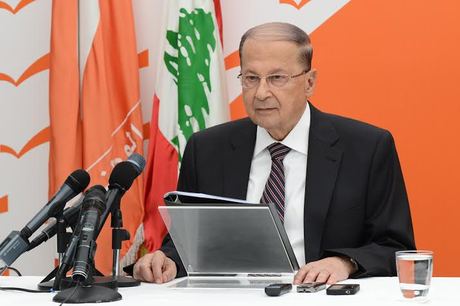 “They can talk as much as they want... I will not withdraw my candidacy and I will never back down,” Aoun's visitors quoted him as saying in comments published in As Safir newspaper.

He pointed out that he had an agreement with Hariri and his nomination was “welcomed,” but “a Saudi veto occurred and Hariri had to back down.”

Aoun expressed belief that the veto was from Saudi Foreign Minister Prince Saud al-Faisal, considering it as a “personal veto.”

Media reports said recently that Hariri discussed last week with French President Francois Hollande in Paris the names of several candidates from the March 14 alliance and the centrists bloc.

The names were later discussed during a meeting between Hariri and al-Rahi on Monday night in Rome.

Al-Rahi reportedly agreed on the names of one candidate from the March 14 coalition and two centrists to run for the presidential elections, noting that the nomination of one of the centrists requires a constitutional amendment.

However, the report was strongly denied by Bkirki and Hariri.

Lebanon plunged into a presidential vacuum due to the failure of the rival March 8 and 14 camps to agree on a compromise candidate.

According to As Safir newspaper Hariri is holding behind media spotlight meetings with “consensual” candidates ahead of his return to Beirut to attend a parliamentary session that aims at extending its term.

Hariri will head during his visit to Lebanon a meeting for the March 14 alliance to announce the withdrawal of Lebanese Forces leader Samir Geagea from the presidential race and to call on Aoun to make a similar move.

Geagea expressed concern in an interview with the Kuwaiti al-Rai newspaper published on Friday that withdrawing from the presidential race would give Aoun a “stronger alibi to continue.”

He described the matter as “complicated.”

Bkirki spokesman Walid Ghayyad reiterated earlier this week calls by al-Rahi on Geagea and Aoun to withdraw their candidacies.

Geagea's candidacy has angered the FPM and the March 8 camp, whose majority of lawmakers have boycotted the presidential elections causing a lack of quorum at parliament.

“They can talk as much as they want... I will not withdraw my candidacy and I will never back down,”

This man depicts the meaning of betrayal, treason, selfishness, and corruption.

Not to mention that he had NEVERTHELESS submitted his candidacy anyway!!!

Nobody hurt the Christians, their message, and their future more than Aoun.

i did not get it ...what candidacy?? wasn't jiddo saying that he will only run for office if he is consensual candidate hence he is not a candidate ...so now he is a candidate and will not withdraw?? Tayyib tfaddal jiddo come to the polls next session since he is a candidate senile fuctard

CLAoun is the appetime of a sore loser. No principles, no respect, no value. Pathetic at best.

So Aoun finally disproved Flamey's infamous claim that he wasn't a candidate hahahahahaha this lunatic is so delusional. First the conditions weren't right to nominate himself, then he boycotts Parliament, then he proposes a "limited constitional amendment" then backtracks and said he never proposed an amendment because it'd be a coup against Ta'ef thus he's incapable, but he's still a reformist, now he won't withdraw a candidacy he never announced hahahahahahahahahaha who can take this senile, demented, self-contradicting psychopath seriously anymore

And Hizbollah are taking advantage if his senility to canibalize the lebanese institutions.

“They can talk as much as they want... I will not withdraw my candidacy and I will never back down,” Aoun's visitors quoted him as saying in comments published in As Safir newspaper.

You have had your fair share of talking Mr Orange. You can't even keep track of what your saying. All you wanted was the presidency and you take the country on a circus for five months instead of simply submitting your nomination... And that makes me wonder: since you won't withdraw your candidacy, you're a candidate, right??? And if you're a candidate, and Geagea is a candidate, why can't there be a vote????

Bashar al-Assad the mass murderer even staged an election, North Korea even sent observers to oversee the democracy taking place in Syria... Go to Parliament you lunatic

The bottom line is the shiites do not want Geagea, and the Sunnis do not want Aoun. The difference is Geagea said let's find an alternative, Aoun refuses.

This isn't about Geagea, that was a pretext. Read the article. It said Hariri plans on withdrawing Geagea's candidacy. And what defines "candidate"??? Apparently in this country you can be a candidate without formally announcing your candidacy. So that's all nonsense. Aoun even said last month, he will not discuss the nomination of any other candidate

guys do not waste your breath:

aoun has one single role in life: destroy the Christian presence in Lebanon.
check all he has done so far.....

so when mutaqbal and fpm were cuddling up a few months ago, they were making deals behind jaaja back to bring aoun as a president.

Now that this deal didn't go through, he is lashing out. Not to be blamed given his age and mental status

hahaha! My boss gave us a bonus for introducing him to naharnet. He loves your comments flamethrower, and he just authorized us to log on whenever we want because he thinks your comments improve our productivity!

REMINDER
Thank you ..-flamethrower-. for your continuous support of General Aoun and Hizbollah, but after yesterday's embarrassment We no longer require your services. Effective today, you are no longer on our payroll as a paid poster. Your recent inconsistencies and posts have become a LIABILITY for the party and any future posts you make are your own personal opinion or those of your new found employer. We urge you to stop by our headquarters at your earliest convenience and collect your personal belongings and your last paycheck. We have included a special end of service "bonus" package that you will no doubt appreciate.
We thank you for the time you spent as a paid employee of the party and its media outlets. We wish you success in all your future endeavors at our sister Al Manar.

let it be well why not but you need a new parliamentary law and that cannot happen if there is no president elected.

Aoun will never be president.

Flamethrower according to every party now belonging to M8 Aoun's government was illegal and unconstitutional, sorry to break your bubble. That was still the case as 2005 began. Once he was bought off everything changed overnight. He was no longer the Zionist, murderer, coward, usurper, embezzler, traitor, unconstitutional, deserter, criminal, US tool, coup leader, illegal PM...

He was prime minister in a military cabinet. He was acting president just like Sanioura was and like Salam is right now. Never the President of Lebanon...always living in the past idolising this psychopath

Just remember your idol was never elected. He was handed the keys by Gemayel as he walked out of Baabda Palace. Remember how everyone protested his appointment?? Remember when the Muslims were so pissed at Aoun that they made their own government???

Aoun was never the president of Lebanon. He was a general who just had support of Christians in East Beirut.

you mean he was president and six ministres (with a smile). I mean this guy is really a senile clown, not to mention his followers.

hahahahahahahhahaha! Flamethrower, we are laughing so mutch so mutch in the office. Our new receptionist is in tears over your funny comments. The boss decided to give us the afternoon off so we may get a dose of positive energy while reading your hilarious comments! Something another, completely another flamethrower;)

Even your lover Roar doesn't claim there's mistranslation. He reads Aoun articles and says God bless the General of generals. When I point out Aoun's self-contradictory nonsense all Roar says is it's up to me how I want to interpret it hahahahahahahahaha

Aoun should be arrested as a traitor to the nation, a collaborator with Lebanon's foremost ennemies ie. the Syrian and Iranian regimes.

He pointed out that he had an agreement with Hariri and his nomination was “welcomed,” but “a Saudi veto occurred and Hariri had to back down.” Aoun expressed belief that the veto was from Saudi Foreign Minister Prince Saud al-Faisal..

Hahahaha yeah sure without Saud al-Faisal's veto Hariri would be running to Parliament to elect Aoun and if thev Syria army attacked and everyone left Aoun will be the last one to leave, never mind leaving he will fight them to death and be buried in his command center, still delusional

M11er, both your statements are correct, the "or" is unnecessary where an "and" would do.

This article cannot be true..... I was assured by Mr Bore and TaqiyaThrower that the deserter ex-general in not a candidate.