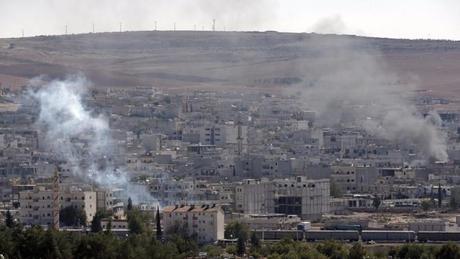 Kurds battling jihadists for the Syrian border town of Kobane welcomed a first U.S. airdrop of weapons Monday as neighboring Turkey said it will help Iraqi Kurds to join the fight.

Ankara has refused land deliveries of arms to the Syrian Kurds, who are linked with Turkey's outlawed rebel Kurdistan Workers' Party (PKK), but said it was helping Iraqi Kurds to reinforce the strategic town.

The main Syrian Kurdish fighting force in Kobane hailed the airdrop, saying it would "help greatly" in the town's defense against a nearly five-week offensive by the Islamic State group (IS).

U.S. Secretary of State John Kerry said it would have been "irresponsible of us, as well as morally very difficult, to turn your back on a community fighting ISIL," using another acronym for IS.

The top U.S. diplomat said the situation amounted to a "crisis moment" and insisted the move was not a shift in policy.

He echoed remarks by a senior administration official that the airdrop was in recognition of the "impressive" resistance put up by the Kurds and the losses they were inflicting on IS.

Washington's hope was that "Kurds who have proven themselves to be very strong and valiant fighters will take this fight on," Kerry said.

Three C-130 cargo aircraft carried out what the US military called "multiple" successful drops of supplies, including small arms, provided by Kurdish authorities in Iraq.

The supplies were "intended to enable continued resistance against ISIL's attempts to overtake Kobane," said Central Command, which oversees American forces in the Middle East.

The US-led coalition has carried out more than 135 air strikes against IS targets around Kobane, and an AFP correspondent just across the border in Turkey reported a fresh raid on Monday afternoon.

"The military assistance dropped by American planes at dawn on Kobane was good and we thank America for this support," said YPG spokesman Redur Xelil.

"It will have a positive impact on military operations against Daesh and we hope for more," he added, using the Arabic acronym for IS.

Xelil declined to detail the weapons delivered but said there was "coordination" between U.S. officials and YPG forces over the drop.

"Weapons have been sent according to their needs, and this is the first batch, and included heavy weapons," said Halgord Hekmat, a spokesman for Iraqi Kurdish peshmerga forces, without providing further details on the arms.

IS militants launched their offensive on Kurdish fighters around Kobane on September 16, swiftly pushing them back to the town itself and sparking an exodus of 200,000 refugees over the border into Turkey.

But the Kurds have kept up a dogged resistance on the streets of the town, of which they currently control around half.

One senior administration official said Kurdish fighters had put up an "impressive" effort in the face of the IS but cautioned that the security situation was "fluid".

Ankara has kept the YPG at arms length because of its links to the PKK, which has waged a three-decade insurgency for Kurdish self-rule in southeast Turkey that has left some 40,000 people dead.

"We are assisting peshmerga forces to cross into Kobane," Cavusoglu told reporters in Ankara, adding that talks on the issue were ongoing but without giving further details.

"We have no wish at all to see Kobane fall."

The YPG spokesman said no peshmerga had yet arrived in Kobane and declined to comment on the Turkish plan.

In its latest air strikes, the U.S.-led coalition bombed a bundle of supplies that went astray near Kobane to prevent it from falling into the jihadists' hands, Central Command said.

But despite carrying out its first airdrops in Kobane, the U.S. military says its top priority remains Iraq, where IS swept through much of the Sunni Arab heartland north and west of Baghdad in June.

Since last week, the Iraqi capital has seen a rise in the number of bomb attacks, several of which have been claimed by the Sunni extremist IS.

And on Monday a suicide bomber detonated explosives outside a Shiite mosque in the central Baghdad neighborhood of Sinak, killing at least 11 people and wounding 26, officials said.

The violence has raised fears that IS will attack large gatherings of Shiite worshipers during the upcoming Ashura commemorations, the target of devastating bombings in past years.

Yeah Kurdish guys listen to Qawmibigjohn he's your "comrade" hehehe, he wants you to leave your towns and villages, it's what's best for you. What's best for you is also to support the Baath regime, you know, the one that withheld you Syrian citizenship for all these year. It was for your own good. Citizenship would have given you rights you don't really need. Like government services, social and economic, you'd hate that, yes?

The U.S. *did* loose in Vietnam and suffered a humiliating retreat as evidenced by that iconic picture of Vietnamese who supported the US hanging from a helicopter trying to lift off from the US embassy.
Then again the assertion that the US won in Vietnam, by those who proclaim the 2006 debacle that HA put Lebanon through which resulted in half of Dahie destroyed, is not surprising.
After all, was it not a Devine victory. No not really...