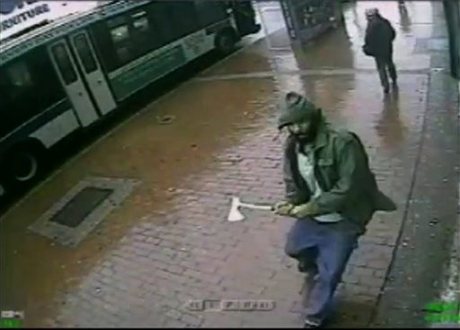 The man who attacked New York City police officers with a hatchet before being shot dead was reported to have Islamic "extremist leanings" police and a monitoring group said.

The man, identified in the U.S. media as Zale Thompson, had posted an array of statements on YouTube and Facebook that "display a hyper-racial focus in both religious and historical contexts, and ultimately hint at his extremist leanings," the SITE monitoring group said.

Four rookie police officers in the city's Queens borough were posing for a photograph at the request of a freelance photographer when the man walked up and without saying a word attacked them with the hatchet, a city hall statement said.

One officer was hit in the arm and another in the head before the other officers shot and killed the attacker, according to police commissioner Bill Bratton.

A 29-year-old bystander was accidentally hit by a bullet in the lower back and taken to a hospital, while the man who took the photograph was cooperating with police and was not considered a suspect, Bratton said.

The officer with the head injury was in critical but stable condition in the hospital.

SITE, which monitors radical Muslim groups, said that in a comment Thompson had posted to a pro-Islamic State video on September 13, 2014, he described "jihad as a justifiable response to the oppression of the 'Zionists and the Crusaders.'"

But Bratton said that police were investigating the motive for the attack and that it was too early to determine whether it was terror-related.

"There is nothing we know of at this time that would indicate that were the case," he said.

"I think certainly the heightened concern is relative to that type of assault, based on what just happened in Canada and recent events in Israel -- certainly one of the things that first comes to mind -- but that's what the investigation will attempt to determine," Bratton said.

He was referring to what Israeli police have described as a "hit-and-run terror attack" on Wednesday, when a Palestinian driver killed a baby after he rammed his vehicle into a group of pedestrians in Jerusalem.

One ran his car over two soldiers in a parking lot in Quebec, killing one, before being shot dead by police on Monday. Two days later another shot an unarmed soldier at an Ottawa war memorial before storming into parliament where he was gunned down.

The authorities have said that both attackers were extremists tempted by war in Syria, but have found neither any connection between them nor evidence of a wider plot.

Canada has never before been hit by Islamist violence, but it has been threatened in militant broadcasts over its role in the U.S.-led air armada striking the Islamic State jihadists in Iraq.

Another day, another instance of salafist-jihadist terrorism.

one country after the other, they make sure muslims and arabs are utterly despised and hated. nice work saudi!

you're the one posting spam and pointless sectarian incitement.

luckily most countries already had the anti terrorists networks put in place to watch for the financiers of hezballah's and similar jihadi terrorist networks, they can use those to look for the new terrorists

I was thinking the same thing mowaten, exactly the same. We are so so similar. We both are shia extremists; we both pretend to be moderates; we both are paid to post; and we both lecture others and accuse them of what we are. I just hope others don't think we are one poster.

you need not worry mowaten about it because you only travel beirut damascus and tehran.

Yes definitely! Detective Anonyme cracked the case!!
Andora & Monaco must be in on it too, since they didnt get attacked either! Genius!

lol selling islam just got a bit tougher this week.

are you a salesman?

well i do it on the side, but as a hobby and collector of what i sell.
im also honored that i now have a naharnet impersonator. thanks brother.

These people are like a cancer that needs to be eliminated before its too late.

Kindly Sebouh80 (Guest), stop using my registered guest screen name. Please, choose any other name but not mine and very thank you

who are the terrorists who gave you 6 thumbs down? are these people living in caves in pakistan?

anonymetexasusa, do you know why i was banned forever?!

Are you kidding me?