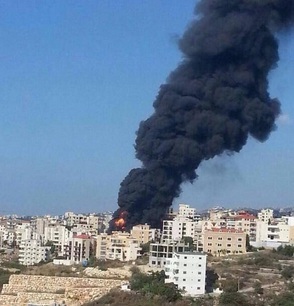 A huge fire erupted Friday at Tabet fuel station in the Mar Semaan neighborhood in the northern coastal town of Byblos, causing major damage and gutting four floors of an adjacent building.

The fire broke out while a fuel tanker was pumping fuel into the storage of the station, which is located near Saint George church, creating bumper-to-bumper traffic in the area.

The fire “burned four floors of an adjacent building owned by Ghassan al-Aqouri in addition to the fuel tanker which sparked the blaze and a Grand Cherokee SUV that was parked on the side of the road,” NNA said.

It also damaged a red Mercedes as security forces, rescue crews and local authorities arrived on the scene and inspected the devastation, the agency added.

wow.. we really ought to listen to you more often terrorist, you're so full of... wisdom!

The smoke has the shape of Lebanon on the map.