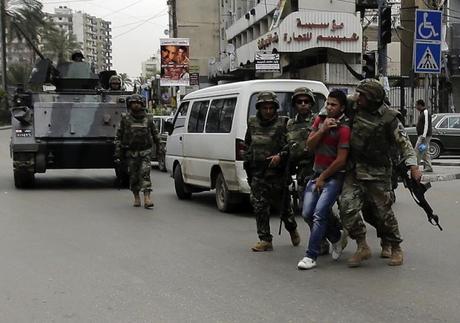 Meanwhile, al-Jadeed TV said 15 people were injured, including eight troops. It said the army's casualties include a first lieutenant who was “critically wounded.”

The Tripoli News Network Facebook page for its part said that seven civilians were wounded in the clashes.

The identity of the gunmen and the reason of their attack on the army were not immediately clear, but media reports said the fighting likely erupted following raids linked to the apartment in the Dinniyeh town of Asoun, where troops had arrested Thursday the “dangerous terrorist” Ahmed Salim Miqati and killed three others.

A security official said earlier on Friday that five troops and a number of Islamist gunmen were wounded in a clash in a historic area of Tripoli.

"The number of wounded soldiers has risen to five," said the official, who spoke to Agence France-Presse on condition of anonymity, adding that "several gunmen have been injured, while others have been arrested."

The clash that initially erupted in the old souks also extended to other areas. Tripoli's historic heart is listed by UNESCO as a world heritage site.

Several TV channels revealed that the exchange of gunfire had first erupted in the al-Souwaiqa-Khan al-Askar area in Tripoli.

The army brought reinforcements to the areas of clashes and took defensive measures at all of its positions in Tripoli, according to LBCI television.

As a result of these clashes, stray bullets reached "areas far from the old souks and its surroundings," said the Tripoli News Network Facebook page.

“The clashes have spread in Tripoli and sniper gunfire is targeting several neighborhoods,” MTV reported.

Voice of Lebanon radio (100.5) said the fighting started during a raid by the army in al-Tarbiya area, "where Ahmed and Omar Miqati used to live."

Army intelligence agents had raided at dawn Thursday an apartment in the town of Asoun in the northern district of Dinniyeh, which was inhabited by a “group of terrorists,” killing three gunmen and apprehending a fugitive.

Earlier on Friday, the army arrested two wanted men in al-Mankoubin neighborhood in Tripoli after an exchange of fire.

“Army troops apprehended two wanted men from al-Mankoubin neighborhood, one from the Salha family and the other from the Dinnawi family,” said the National News Agency.

Gunfire was exchanged between them before the men were arrested.

On Thursday evening, two masked men on a motorcycle shot at the soldier Khaled Youssef in Ibn Sina street in Tripoli's al-Qobbeh.

You beat me to it mowaten. I was thinking the same thing, exactly the same! We are so so similar: we are both narcissists, both shia extremists who pretend to be moderates, both have an inferiority complex, both pretend to be secular, and both have multiple accounts. I just hope readers don't think we are the same poster.

flamethrower is compensating for his own absence by having his alter ego mowaten post for the two of them.

you two always appear at the same time; coincidence!

Mowaten and Karim , I'm sure it is not of that much of difference from the ones that happens in Baalbek and brital. What happened to your cousin that was considered and wanted as the biggest drug dealer in Bekka , that got shot, injured and hospitalized a week ago by Lebanese army but his family with RPG's and machine guns went to the hospital and took him out? Oh I forgot it was a mere coincidence.
Just for your information there is saying that says " Every house has a Bathroom, the bigger and expensive is the house the more of bathrooms in that house."

The forum is very quit, did they ban FT and his 100 fake accounts?

he is here as you can see posting frantically showing his real character!

Allah y2awweelak ya Jesh Libnén! RIP to the fallen soldiers. And here's wishing a speedy recovery to the injured civilians...

@esquire your comment is irrelevant and not necessary true

why was I banned along with the_roar?