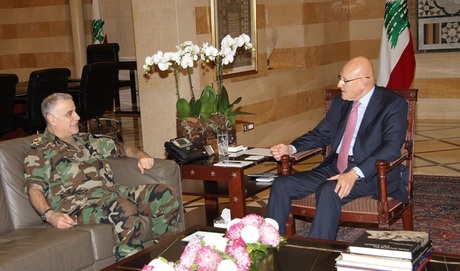 Army chief General Jean Qahwaji briefed Prime Minister Tammam Salam on Friday on the details of the latest Dinniyeh raid, which led to the arrest and death of dangerous gunmen.

Qahwaji discussed in his visit to the Grand Serail “the security developments and efforts exerted by the army to fight terrorism in the country,” said the National News Agency.

The army chief informed the Prime Minister of "the details of the recent Dinniyeh raid that led to the death of three terrorists and the arrest of a fourth, and spared the North and Lebanon dangerous terrorist attacks that were in the making."

Army intelligence agents raided at dawn on Thursday an apartment in the town of Asoun in the northern district of Dinniyeh, which was inhabited by a “group of terrorists,” killing three gunmen and apprehending a fugitive.

Separately, Qahwaji shared with Salam the outcome of his recent visit to Washington, where he held talks with the military chiefs of the countries taking part in the U.S.-led anti-IS coalition.

"He also held talks with U.S. military officials over what can be provided to Lebanon" in the fight against terrorism, NNA added.

The meeting with Salam was also an opportunity to discuss the government's efforts to secure the release of the soldiers who were abducted by the IS and al-Nusra Front during the deadly Arsal battles in August.

Earlier that month, the extremists crossed into Arsal from Syria, capturing soldiers and policemen. Two of the soldiers have since been beheaded and one has been killed in captivity.

The attacks against the military rose after the Arsal gunbattles.

really? how come when syria invaded lebanon and occupied it for 30 years, no lebanese started acting like terrorsits in syria?