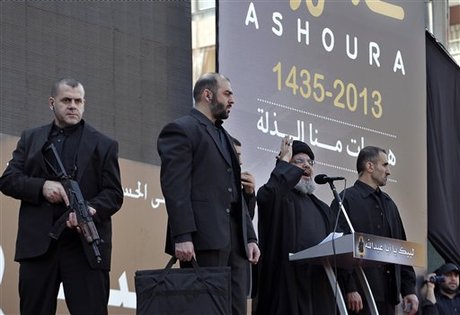 Hizbullah and AMAL movement are taking maximum security measures and precautions to ensure the safety of mourners commemorating the occasion of Ashura that begins on October 25.

The two Shiite parties decided not to minimize their Ashura congregations and processions despite the rising security fears, al-Joumhouria newspaper reported on Saturday.

The daily said that Hizbullah Secretary General Sayyed Hassan Nasrallah will have several televised speeches during the occasion.

Ashura marks the death of Imam Hussein over 1,300 years ago.

Millions of Shiites around the world mark Ashura, which this year climaxes on November 3, by setting up procession tents.

Hizbullah has sent fighters to Syria to back President Bashar Assad's forces against rebels trying to remove him from power. The armed intervention in Syria earned the Shiite group the enmity of Syria's predominantly Sunni rebels. Assad is a member of the Alawite sect, an offshoot of Shiite Islam.

Over the past year, Syrian troops and Hizbullah fighters have captured most of the towns and villages in Syria's mountainous Qalamun region along the Lebanon border, depriving the rebels of residential areas where they can stay during the winter.

There have been reports of other skirmishes between Hizbullah and militants along the Lebanon-Syria border.

I was just about to point that out, lubnani.salafi.

Where are the Government security forces.

Why are the Lebanese security forces doing the dirty work for HA.

Next year, HA and Amal will need to use drones if they do not listen to wisdom. bachir gemayel told us, and this at the very peak of power of the LF, that NO militia, no matter how powerful it may be, NO militia can replace the state, and this no matter how weak the state could be. So our dear Berri and Sayed Hassan it seems have thick wax covering their ears, and until it all melts, then they'll need to listen, but then, which Lebanese will listen to them anymore?

bottom line, they have a right to celebrate their holiday in peace. Anyone who attacks a sect on their religious holiday is scum.

why was I banned?