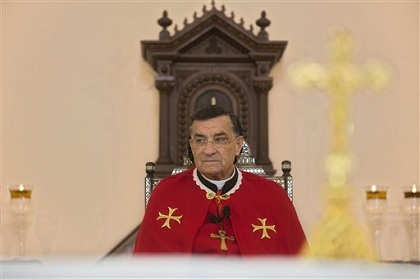 Maronite Patriarch Beshara al-Rahi stressed on Tuesday the importance of equality between Muslims and Christians in Lebanon, reiterating that the fighters of the Islamic State of Iraq and the Levant (ISIL) are not linked to Islam.

“Lebanon is a model for coexistence between Muslim and Christian. They both live equally,” al-Rahi said from the Australian capital Canberra.

He pointed out that Christians should maintain their presence in the region to achieve integration with Muslims.

The patriarch traveled to Australia at the end of October on a two-week pastoral visit.

Concerning the rising threat of ISIL in the region, al-Rahi admitted that the Middle East is going “through difficult stages,” differentiating between terrorist organizations and takfiri groups.

“The jihadists are not all Muslims... It (ISIL) includes all kinds of mercenaries and sick and worried people, who are being exploited,” he added.

He called on ISIL group to engage in a humanitarian dialogue.

The IS group has declared a so-called Islamic "caliphate" in the territory it controls in Syria and Iraq, imposing its extreme interpretation of Islam and executing opponents.

A U.S.-led coalition of Western and Arab nations has carried out a wave of air strikes on IS positions in Iraq and Syria, with around 34 nations committed to the fight against the group.

Long live coexistence, friendship and love among all our communities.

This will only happen when Lebanon cancel it's sectarian laws and when every Lebanese is only considered as a Lebanese no matter what his sect (or lack of sectarian affiliation) is.

Today, it is hidden hatred and hypocrisy between communities.

Well that's the funniest thing I heard all day. A country that racism is second nature, everyone is so religion dependent that social affairs are handled in religious courts. A country that is continuously torn with civil wars and strifes. Almost all religions are segregated. Yeah if this is a great example of coexistence I hate to see a worst example!

Sadly, you won't find any worst example in the present day.

A civil war that even didn't end so far and hundred of thousands of dead, that's a leading example? You can't even marry someone from another "community". If you wanna marry a "muslim" woman and you are "christian" (i.e. born from christian parents), you simply can't. Racism and sectarian hatred is the basis of all evils in Lebanon.

And there is still no president because of sectarian ridiculous laws.

How can this being a leading example? The sectarian issue makes Lebanon an apartheid State torn in internal wars and conflicts.