Geagea: We Can Avoid Extension by Electing President instead of Renewing Parliament's Term 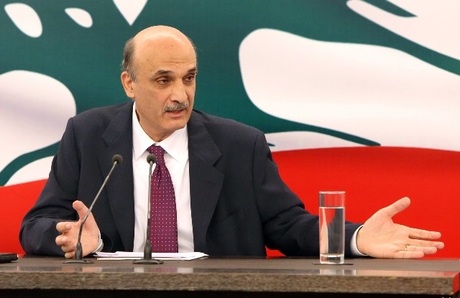 Lebanese Forces leader Samir Geagea renewed on Tuesday his opposition to the extension of parliament's term, while accusing the government and Change and Reform bloc of adopting double standards in this issue.

He said during a press conference: “We can avoid the extension by heading to parliament and electing a president on Wednesday instead of voting for the renewal of its term.”

He explained that since lawmakers would be present at parliament, “why shouldn't they exploit the fact that quorum would be met to elect a president?”

The election of a president should then be followed by altering deadlines linked to the parliamentary elections in order to prepare for the polls, he suggested.

Geagea noted that the Mustaqbal Movement and Hizbullah have adopted clear stances since the start over supporting the extension of parliament's term.

The Change and Reform bloc however has been saying that it rejects the extension, while it has not taken any measures to actually avoid it and stage the parliamentary elections, added Geagea.

“Can someone explain to me what the bloc, which has been so vocal against the extension, done to ensure that the polls are held?” he asked.

He accused the bloc of seeking to create vacuum in Lebanon in order to alter the Lebanese political system.

“The Change and Reform bloc has the right to express its views over the current system and it should take practical measures should it seek to change it,” explained Geagea.

“How can we choose to alter this system without proposing an alternative to it?” he wondered.

“They want to impose the status quo on the people,” he remarked.

“They want to return us to the situation witnessed before the civil war,” warned the LF chief.

Geagea said that the Change and Reform bloc has 24 hours to respond to his initiative.

On the parliamentary elections, the LF chief said: “Why haven't those who are members in cabinet taken practical steps to ensure that the polls are held?”

The Kataeb Party, which is represented at cabinet, has voiced its rejection to the extension, but it has not taken an steps to avoid it, he noted.

The Mustaqbal Movement and Hizbullah, who are also part of the cabinet, did not take such measures since they have long advocated the extension, he said.

Moreover, Geagea stated: “The government has exerted all efforts to extend parliament's term and avoid staging the elections.”

“The officials have forced the people to choose between the extension or vacuum,” he lamented.

Last year, the parliament extended its term until November 2014 after the MPs failed to agree on a new law and claimed the security situation did not guarantee violence-free elections. A similar extension is set to take place on Wednesday to avoid a further vacuum.

The Baabda Palace has been vacant since the expiry of President Michel Suleiman's term in May. The rival MPs have failed to elect a new head of state over their differences on a compromise candidate.

The majority of the March 8 camp's lawmakers have boycotted the sessions, insisting that there should be consensus on a candidate first.

But their boycott has also been seen as a sign of their rejection of Geagea's candidacy, which was officially endorsed by the March 14 forces before the coalition suggested agreeing on a compromise nominee.

Enough of these political blackmail and games! Abide by the constitution or let the LAF enforce a military coup for the next 10 years and rid us of this sectarian political cancer!

It is the government's responsibility to prepare for the elections, I think we all have to agree with that. By that I mean setting up the funds, the employees supervising or administering the elections, but most importantly the committee to oversee the elections. The Salam government has to take any and all decisions by consensus meaning if one minister disagrees with any decision, that decision will not pass. If your FPM cares so much about elections why have they refrained from pushing the elections/preparations through the cabinet months ago instead of posturing. The Lebanese Forces are not part of this government and bear no responsibility for preparations of elections.

Yes, what a coincidence: TaqiyaThrower gets banned, and a brand new commentator
(puppeteer) shows up, with the same non-stop posting pattern and attitude.

I'm sure it is just a coincidence.