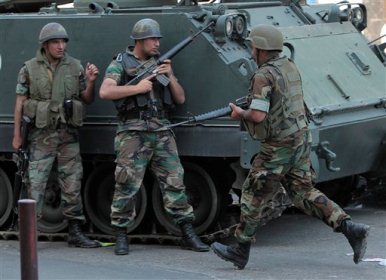 A member of the Arab Democratic Party was arrested by the army on Tuesday as he was trying to cross from the northern district of Akkar into neighboring Syria, state-run National News Agency reported.

“The army arrested at one of its checkpoints in Akkar a man identified as A. Kh. as he was trying to cross into Syria,” NNA said.

It noted that he is “one of the ADP cadres in Jabal Mohsen who had left the neighborhood as the security plan got underway in the city of Tripoli.”

Separately, the army announced arresting four Lebanese citizens and a Syrian national in the northern town of Bhannine on suspicion of “involvement in armed attacks against army troops.”

The Tripoli security plan had kicked off on April 1 with the aim of putting an end to several rounds of deadly sectarian clashes between gunmen from Jabal Mohsen and Bab al-Tabbaneh.

ADP leader Ali Eid and his son Rifaat managed to flee to Syria although dozens of fugitives from both districts were arrested.

Tuesday's arrests come amid heightened security measures by the army, which fought deadly clashes with Islamist gunmen last month in Tripoli and the nearby regions of Dinniyeh, Bhannine and al-Mhammara.

better yet: they will ask army intelligence to go free him for them :)

geha is not only content with begging israel to bomb lebanon to bits, but also she deliberately insults the army! mareed nafsiyan!

dont u get bored of all ur comments agains ha in blaming everything evil on them?
iam sure tomorrow if there might be an article about ebola u are going to blame ha and iran and everybody you dont like for it.

all the hate and the big differences in such a small country still didnt changed from the times of civil war, do u really think things are getting better with this kind of silly behavior?

of course lets go on in hating each other so we are going to be even worser than the baddest african country...just let me think about it...we allready are, dont we?