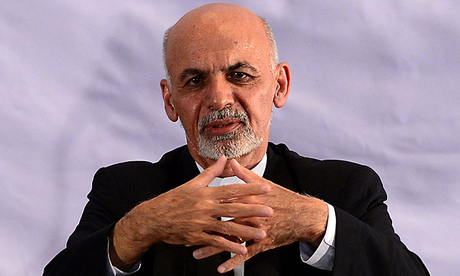 Ghani will hold talks with Prime Minister Nawaz Sharif and the pair are expected to watch a cricket match between the two countries on Saturday, in a public demonstration of better relations despite fraught cross-border tensions.

Both nations have long accused each other of allowing militants to shelter in the border regions and launch bloody attacks that threaten regional stability.

Former Afghan president Hamid Karzai routinely accused Pakistan of continuing to fuel the Taliban insurgency to destabilize his country as a hedge against Indian influence there.

Islamabad denies the charge but its support, and that of its powerful military, are seen as important for peace in Afghanistan as NATO pulls out its combat troops.

Pakistan was one of only three countries to recognize the hardline Taliban regime that ruled Kabul from 1996 until 2001, when it was deposed by a US-led international military coalition.

Despite repeated visits to Pakistan by Karzai, there was little palpable improvement in relations during his 13 years in power.

The long-running tensions between the two countries were underlined by a U.S. Pentagon report last week that said Pakistan continued to use "proxy forces" to destabilize Afghanistan.

Pakistan has long been concerned about the influence of arch-rival India in Afghanistan, fearing "encirclement" on its western border.

But diplomats say that Ghani's presidency, which started in September, offers a major opportunity at a time when U.S.-led NATO troops are withdrawing from the fight against the Taliban.

The Afghan leader arrived at Chaklala air base in Rawalpindi, Islamabad's twin city, on Friday and was greeted by Sartaj Aziz, Sharif's special adviser on foreign affairs.

The meeting comes a week after the general, widely regarded as one of the most powerful men in military-dominated Pakistan, held talks with Ghani in Kabul.

Later, the Afghan president addressed business leaders from both nations and stressed the need for joint efforts to boost the regional economy, including through infrastructure projects.

"Let's connect South Asia to Central Asia. Alone we can strive, together we will thrive, and let's thrive together," Ghani said.

He said the two neighbors have fixed an initial target of taking their bilateral trade to $5 billion by 2017.

In another bid to boost ties, Pakistan's commerce minister Khurram Dastagir offered to train Afghan customs officials and reopen the border crossing at Ghulam Khan post as soon as the security situation improves.

Ghani, who emerged as president after a long dispute over fraud-mired elections, has said that seeking peace is his first priority after decades of conflict in Afghanistan.

Since taking power the 65-year-old former World Bank economist has made trips to Saudi Arabia and China, two key allies of Pakistan.

A Western diplomat told Agence France-Presse Ghani had used the visits to ask Riyadh and Beijing to encourage Pakistan to support peace efforts in Afghanistan.

According to the diplomat, two approaches to dealing with the Taliban are currently being considered by Afghanistan.

Chief executive Abdullah Abdullah favors completely resetting ties with Pakistan and using them to approach the Taliban, the diplomat said.

Ghani, in contrast, would prefer to follow Karzai and try to deal with the insurgents directly, through contacts in restive eastern Afghanistan, and bypass Islamabad, the diplomat said.

The Taliban, who dismissed the Afghan election as a U.S. plot, have often said they will fight on until all foreign troops have left Afghanistan.

About 12,500 U.S.-led troops will stay on into next year on a NATO training and support mission.

Don't forget the first lady is from Lebanese origin.