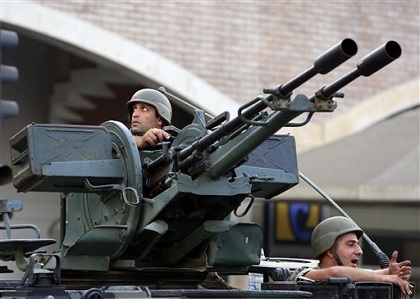 The United States has reportedly questioned Mustaqbal Movement leader MP Saad Hariri's decision to “diversify” the number of countries from which to obtain weapons as part of the Saudi military grant to the army, said As Safir newspaper on Saturday.

Widely informed sources told daily that the U.S. filed an official complaint to the Lebanese government, the army command in particular, for attempting to strike a deal with Russia on supplying the army with used T-72 tanks.

The U.S. is set to provide the army with new tanks.

The sources said that the U.S. presented the Lebanese powers documented information that “Lebanese and Russian mediators are set to make commissions worth the sum of the entire deal.”

The details of the figures were not disclosed, but they exceed 100 million dollars, said As Safir.

The Saudi grant is worth a billion dollars, which will be directed to the army and other security agencies in Lebanon.

Meanwhile, South Korea had expressed an interest in joining the list of countries partaking in the military deal.

It proposed that the Lebanese army purchase Korean military equipment, while it will grant Lebanon a modern frigate.

A Lebanese military delegation had traveled to Beijing recently to that end.

In August, Hariri announced that Saudi Arabia has provided Lebanon's army with one billion dollars to strengthen security.

Earlier in November, Saudi Arabia and France inked in Riyadh a deal to provide the Lebanese army with $3 billion worth of French weapons.

Another credible report by As Safir, the beacon of truth in professional journalism.

The Abrams M1A2 is far superior than any tank existed till today. The T-90 is nothing more than an upgraded T-72, renamed after the mauling the 72 received in Desert Storm. It is wholly inferior to the Abrams (and the Leo, Challenger, Merkava) in armor protection, firepower, electronics, and speed/acceleration.

oh geha, because according to you, only Al Arabiya CNN and Al Jazeera speaks the truth.

why, what's wrong with Manar, OTV, and Jadid with a spice of NBN!

Geha, Iranian outlets and sub media outlets are the most credible,. and honest and we should listen, and serve without any question or Dark side Pasadran - Rev. Guards will make an instant visit to straighten things up!!! In Their world media is for giving you instructions how to obey the supreme Ayatollah rather than giving any real facts.

actually it is written ASSafir,,, f you don't mind!!! Plus yes ... The deal with Russia is upsetting Iran, Assad and Assafir more than any one else, if it was true to begin with. I doubt that there was any indication that The Lebanese army was going to get such a tank, and What is more urgent is to stop the deal of land to air missiles with Assad.

who cares where they are purchased.... many of Uncle Sam's allies purchase military hardware fro the Russians... why complain here...?

I guess we need to buy merkavas. I will be easier to get them serviced across the border.

We should wait for the Iranian version soon, that will be no threat to anyone.

will roar be posting today or you both will be using this screen name.?

something another flamethrower kha kha kha!

I won't trust any weapons that come from USA or France as they would be disabled with a push of a button middle battle at the behest of Israel.

(1). The US in itself has been a remarkable failure in world diplomacy. One look at how the Israeli/Palestinian conflict among others has been handled is proof enough of US policy failures. Whatever that seems to worry one US administration after the other over the LAF should now dissipate as the LAF has proven well beyond all doubt that it is fully cohesive, united and capable. Now when the LAF seems to be knocking its head against a hard US wall of outdated thinking, then one is left with no choice but opt for other option as to where we can buy weapons. In plain simple English, the LAF does not aim to invade Israel, nor would its weapons and logistics fall to Hezbollah, in plain simple English, the LAF is doing its best to keep Lebanon from falling to bits and pieces and God knows it is doing a great job with the little it has

(2). Some years ago, during the battle of Nahr Al Bared, the LAF could have shortened the war and its losses by leveling that nest of terrorists within a week or two at most, yet the LAF behaved as the best army in the world would, in the folding hours of that long drawn out war, soldiers of the Lebanese Army were seen carrying Palestinian children and helping women, the elderly out of the camp and into relief facilities. If today the US wants to float its myopia and stupidity once more and at the expense of Lebanon's security, then yes, let's go and buy Russian Weapons, Brazilian, Taiwanese, South African, Iranian, Indian, wlak the world is awash with the weapons industry. $4BN could buy us a lot, why wait for uncle Sam to make up his slow mind?!

"stick them where they could be useful!!!!"
The only appropriate place is your ASSad.

The LAF should seek the best weapons for the best price regardless of the source. Ignore any and all pressures, just make sure the deals are the best we can secure.

For once you are thinking straight :-)

This looks like jewish infested website. I wonder if you get money from israHell as from saudi roaches?