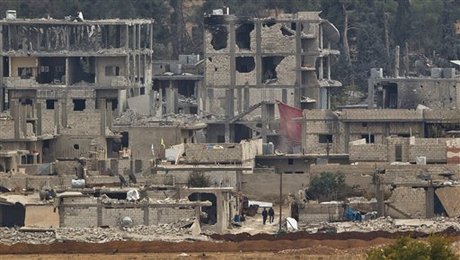 Syrian Kurds fighting the Islamic State group in the flashpoint town of Kobane made new gains Tuesday, expelling the jihadists from several central buildings and seizing weapons, a monitor said.

The advance came hours after the U.S.-led coalition launched four strikes against IS positions in central Kobane, according to the Syrian Observatory for Human Rights.

The Kurdish People's Protection Units (YPG) staged a "special operation" during which they captured six buildings used by IS, said the Britain-based group, which relies on a network of sources in Syria.

Thirteen IS fighters were killed, it said.

The U.S. and Arab allies began strikes against jihadist positions in Syria in late September, days after IS launched its assault on Kobane.

Some 1,200 people, mainly fighters, have been killed in the battle for the town on the border with Turkey.

Kobane has become a major symbol of resistance against IS, which has committed widespread atrocities and imposed its harsh interpretation of Islamic sharia law in areas under its control.

Last month, the United States and Turkey warned that the town was teetering on the brink, but analysts say there have been signs the tide is beginning to turn in favor of its Kurdish defenders.

Highly motivated Syrian Kurdish troops are fighting alongside Iraqi peshmerga forces and Syrian rebels that have reinforced the town's defenses, backed by U.S.-led strikes on IS positions.

The multi-sided Syrian war has killed more than 195,000 people and forced millions from their homes since it began three and a half years ago as an uprising against President Bashar Assad's regime.

On Tuesday, at least 13 civilians, including two children, were killed in regime air strikes on a rebel-held area further west in Aleppo province, the Observatory said.

The strikes came hours after 14 other civilians were killed on Monday night in Al-Bab, an IS-controlled town in the same province, it added.

The Syrian government has in recent months stepped up its air strikes against IS-held towns dotted across northern and eastern Syria, but most of the casualties have been civilians.

The U.N. and human rights groups have repeatedly called on all sides in the war, including the Assad regime, to stop using weapons that fail to discriminate between civilians and military targets.