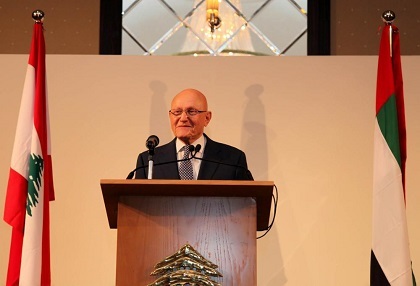 Prime Minister Tammam Salam said Tuesday that the presidential vacuum has placed burdens on Lebanon, calling for the swift election of a head of state.

Salam, who is on an official visit to Dubai, also said the extension of parliament's term earlier this month was not the best solution to Lebanon's problems.

Baabda Palace has been vacant since President Michel Suleiman's term ended in May.

The vacuum was exacerbated by the extension of the legislature’s mandate to June 17.

Pro-extension MPs claimed their move will prevent another power vacuum from forming in a country.

“The regional and international conflicts and confrontations are affecting the country as they have always done,” said Salam.

“And today we are confronting a huge burden and challenges, mainly the issue of Syrian refugees and terrorism that is targeting us,” he said.

Lebanon has around 1.5 million refugees who have fled Syria's civil war that erupted in March 2011.

Their numbers began declining this month when the government decided to stop their entry to Lebanon except in certain cases.

The presence of the refugees in Lebanon and Hizbullah's fighting alongside troops loyal to Syrian President Bashar Assad against Sunni rebels have led to the rise in terrorist activities.

The Lebanese are bitterly divided over Syria's civil war. Hizbullah's presence in Syria has drawn anger at home from Lebanon's Sunnis, leading to Sunni-Shiite tensions.

This in turn has led to tit-for-tat suicide bombings and several rounds of street clashes in Lebanon in the past year.

Salam said only unity would help the country confront terrorism.

i'm a bit skeptical about salam's whining here because he's among the top beneficiaries of this vacuum. in the absence of a president, the prime minister is the acting president, that means more power for salam.

no accountability without democracy

Any Christian following a traitor, is a traitor himself.

"The one who accepts evil without fighting against, is cooperating with it" (Martin Luther King)

To the followers of the Caporal:
If you consider Israel and Saudi Arabia as evils, it is time that you also consider Syria and Iran as evils.

You give Syria & Iran too much credit Splashy...2 nations under sanctions & war....yet you believe they are throwing bags of money?

What a real shame, what an insult to the dignity of every decent Lebanese, that on this 22 November 2014, Lebanon will observe its national day. But what a day, observing it without a president of the republic, what a shame, what an insult. If I was the general of the army, I will skip this year's celebration, I will not send my troops to goose step for anyone. I will not send my APCs nor anything, this year's observance of the independence has no value without our president and head of state. Let us not mock ourselves anymore, let us leave our boys to stand for better values, for better leaders, our current politicians are the core rot of the worst, no one wearing the Lebanese Uniform should parade for them, no one. 3ayb.