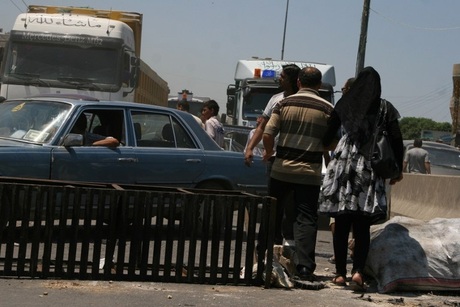 Three Syrians were arrested in the northern region of Akkar on Thursday for supporting the Islamic State of Iraq and the Levant, reported the National News Agency.

It said that security forces arrested the suspects at the Shadra checkpoint for having photographs of ISIL on their mobile phones.

Maps of undisclosed locations were also found on their phones.

Various buildings, including churches, had in recent months been vandalized by Islamic State slogans in Akkar.

Security forces have lately upped their measures against suspected members of terrorist groups, carrying out raids throughout Lebanon, especially against Syrian refugee encampments.

They have intensified their efforts in light of clashes in August between the army and Islamists from Syria who overran the northeastern border town of Arsal.

Several suspects have been arrested.

Last month, clashes erupted between the army and Islamist gunmen in the Akkar town of Bhannine and the northern city of Tripoli.

but Rifi did say you and your likes are traitors.

i would start being very scary for few ones on this forum who openly (...or not, indeed) supported (...and still supports) these animals...i repeat what i said few months ago: any support to these animals is a terrorist act, as such they must answer before the justice...indeed, this is what's happening now. Again, i ask naharnet not to display such comments otherwise it will be considered as an accomplice...Enough is Enough. Thank you

Salafists are to be destroyed...
You must also realize that there is another great danger coming from the Islamic Republic...

They are not scared because they are unaware of what ebola is preparing for them...