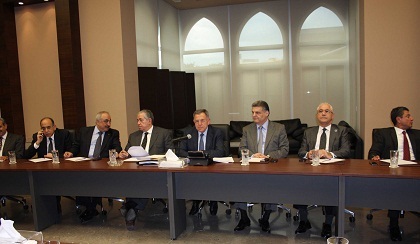 Al-Mustaqbal parliamentary bloc noted Tuesday that al-Mustaqbal movement will not renounce any of its main stances in the upcoming dialogue with Hizbullah, as it accused the party of “undermining the government's credibility” through its policies.

“Former premier Saad Hariri's initiative on willingness to engage in dialogue with Hizbullah is capable of defusing tensions and exploring means to reach an agreement over the election of a new president,” the bloc said in a statement issued after its weekly meeting.

It warned that the continued presidential vacuum “poses a threat to political, security and economic stability in the country.”

Al-Mustaqbal, however, noted that “the initiative does not involve any renouncement of the main stances that were and are still points of contention with Hizbullah.”

It listed the points of disagreement as Hizbullah's “role and illegitimate weapons in several regions inside and outside Lebanon, especially in Syria where it is fighting alongside the Syrian regime in the face of the people, in addition to the issues of the Special Tribunal for Lebanon and the Baabda Declaration.”

“Ex-PM Hariri's initiative represents an open window and a chance that must be seized and capitalized on for the sake of Lebanon, its people and its higher national interests,” the bloc added.

The former premier's adviser Nader Hariri has held talks with Speaker Nabih Berri's aide Ali Hassan Khalil to set the stage for the dialogue between Hizbullah and al-Mustaqbal, al-Akhbar newspaper reported on Tuesday.

The current consultations are focusing on setting the agenda of the talks, which are expected to take place before the holidays.

Separately, al-Mustaqbal bloc slammed Hizbullah's policies, accusing it of “allowing itself to negotiate and make swap deals when it comes to its fighters while preventing the government to do so regarding the captive servicemen through waging a fierce media campaign.”

“Hizbullah's policies and practices undermine the credibility of the government, which contains representatives of the party,” the bloc warned.

Its remarks come in the wake of a swap deal between Hizbullah and the rebel Free Syrian Army, in which the party secured the release of its captive fighter Imad Ayyad in return for two Syrian militants.

The prisoner exchange has sparked controversy in Lebanon, which is still reeling from the abduction of dozens of troops and policemen in early august at the hands of jihadists from the Islamic State and al-Nusra Front.

The servicemen were taken hostage during deadly clashes in and around the Bekaa border town of Arsal.

Three hostages have already been killed by the two groups, and the country has been on edge for months over the fate of the remaining soldiers and policemen.

Pay attention from the Ebola virus....it is deadly