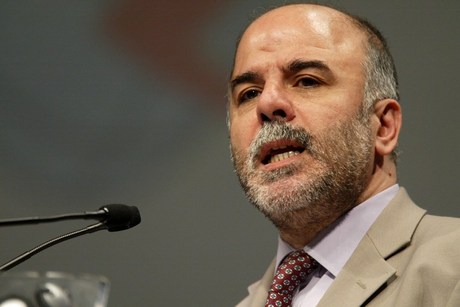 Iraqi Prime Minister Haidar al-Abadi flew to Brussels on Tuesday to attend a meeting of the 60-state coalition against the Islamic State jihadist group and to call for funding, his office said.

Abadi, who is also due to meet French President Francois Hollande in Paris on Wednesday, will brief his allies in the Belgian capital on latest developments on the ground.

Abadi told lawmakers on Monday that he would also call on the international community to set up a special fund to help rebuild regions ravaged by the jihadist offensive.

"It is not fair that Iraq should bear the cost of the war on its own," he said. "We were attacked by outside forces that entered from Syria and destroyed our country."

"An important reason for my visit to Brussels is that 60 states are gathered there and we will ask them: 'Are you standing by Iraq and fighting terrorism?'," Abadi told parliament on Monday.

"Fighting terrorism cannot happen without money, we need their help, at least to establish a fund for the reconstruction of areas that have been destroyed by terrorism."

Thanks in part to a campaign of air strikes led by the United States -- but in which nations such as France, Britain, Australia, Belgium and Denmark also play an active role -- the tide has begun to turn on jihadist expansion.

The advance of IS fighters has stalled in Syria, while pro-government forces in Iraq have notched up a string of victories that have shrunk the jihadist footprint.

The statement from Abadi's office said that during his meetings in Europe he would discuss "ways to expand international cooperation to respond to the threat of terrorism."

Observers have argued that Iraqi forces would struggle to defeat IS fighters without the help of foreign ground troops but Abadi and his Western allies have so far ruled that out.