U.S., Iraqis Helping to Train Sunni Fighters against IS 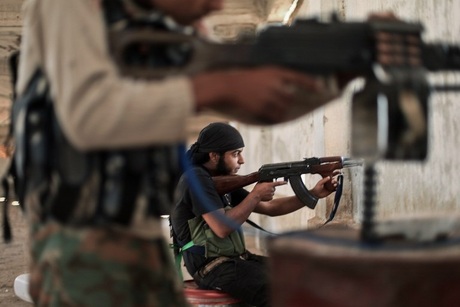 U.S. forces and their Iraqi counterparts have trained about 2,000 Sunni fighters in Iraq as part of efforts to defeat the Islamic State extremist group, a senior U.S. official said Tuesday.

Iraq's Shiite-led government, trying to reverse the marginalization of Sunnis, is seeking to form a "bridging entity" where Sunnis tribesmen defend their provinces before they are brought into an Iraqi national force, the State Department official told reporters on condition of anonymity.

The official disclosed the information as U.S. Secretary of State John Kerry prepared Wednesday to host talks in Brussels with foreign ministers from scores of countries which are trying to help defeat the Islamic State in Iraq and Syria.

The official said the training was occurring at al-Asad air base in Anbar province and elsewhere.

Prime Minister Haider al-Abadi, a Shiite whose more inclusive government was formed in September, "is committed ultimately to bringing the Sunnis into the mainstream," the official said.

IS proclaimed a caliphate in Syria and Iraq in June after making dramatic advances across a swathe of Iraq, partly as a result of appealing to a marginalized Sunni population.

The members of Iraq's government "are working to empower Sunni fighters. They are already graduating Sunni fighters out in Al Asad in the Anbar province," the official said.

Citing figures from Abadi, he said some 2,000 fighters had graduated from al-Asad and elsewhere and they will eventually form a national guard.

He confirmed the U.S. forces, along with their Iraqi counterparts, were training the Sunnis from tribes in Anbar province, while the Iraqi troops were providing them with equipment.

The government is also aiming to form Shiite national guards in Shiite areas as well as mixed forces in areas where both sects live, he added.

Ahead of building up a national force that defends Iraq's territory, "it recognizes there needs to be a middle tier that can respond to terrorism and criminality at the provincial level," he said.

"That is the concept behind the national guard," he said.

The official said foreign ministers from European, Arab and other states that are part of the 60-member coalition against IS will discuss strategy Wednesday at their first ministerial meeting.

Besides discussing the military aspect, they will discuss how to stem the flow of thousands of foreign fighters, legitimize the IS "brand," disrupt IS finances, and provide humanitarian aid to people affected by the violence, the official said.