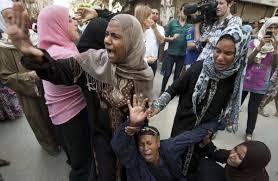 An Egyptian court condemned 188 people to death Tuesday over a deadly attack on police, as the prosecution said it will appeal the acquittal of ex-president Hosni Mubarak over protester deaths.

The accused, of whom 143 are behind bars, were found guilty of taking part in an August 14, 2013 attack on a police station in Kerdassa, a village on the outskirts of Cairo, killing 13 policemen.

The attack took place on the same day security forces violently dismantled two massive pro-Morsi protest camps in Cairo in an operation that led to clashes in which at least 700 lost their lives.

Death sentences in Egypt are subject to approval by the mufti, the country's highest Muslim religious authority. The verdict is to be confirmed or commuted on January 24.

Since the army deposed Morsi last year, at least 1,400 of his supporters have been killed in a crackdown on protests and hundreds sentenced to death in swift trials.

The U.N. human rights office said Tuesday that Egypt must rein in its security forces and investigate rights abuses against protesters.

It said it was deeply concerned by "the seriously damaging lack of accountability for human rights violations committed by security forces in the context of demonstrations."

The sentences came as the public prosecutor's office said it will appeal a court decision to drop a murder charge against Mubarak over the deaths of protesters during the 2011 uprising that drove him from power.

"The prosecutor general has decided to appeal," a statement said, after a Cairo court Saturday ordered the dropping of murder and corruption charges against Mubarak, who was forced to resign after three decades in power.

"The ruling was marred by a legal flaw," the statement said, adding that the decision to appeal was "not influenced by disputes among political groups."

Mubarak is serving a three-year sentence in a separate graft case.

Seven of Mubarak's security commanders, including feared ex-interior minister Habib al-Adly, were acquitted Saturday over the deaths of roughly 800 protesters during the 2011 revolt.

The Court of Cassation, the country's highest tribunal, can now either confirm Saturday's ruling or decide to cancel it, in which case it would consider the case itself.

An appeals court had previously overturned a life sentence for Mubarak in 2012 on a technicality, ordering the retrial that saw the charges dropped.

Mubarak's lawyer has said the 86-year-old could now see an early release from the military hospital where he is being held. He has already served two-thirds of his sentence if time held in preliminary detention since his arrest in 2011 is taken into account.

After Saturday's verdict, more than 1,000 protesters gathered at an entrance to Cairo's Tahrir Square -- the epicenter of the anti-Mubarak revolt -- chanting slogans against the government of President Abdel Fattah al-Sisi.

In remarks Tuesday, Prime Minister Ibrahim Mahlab denounced "those... who want to demolish the state and issue calls to demonstrate and occupy certain places, which is totally unacceptable."

The court's ruling has come under fire from Mubarak opponents, critics and some leftist leaders, and sparked accusations that the authorities are interfering with the courts.

The government has denied any involvement, and Sisi ordered Sunday a review of the criminal code to prevent any legal irregularities.

In his first comment on the verdict, Sisi, Mubarak's intelligence chief, said Egypt was charting a new course.

"The new Egypt... is on a path to establish a modern democratic state based on justice, freedom, equality and a renunciation of corruption," he said.