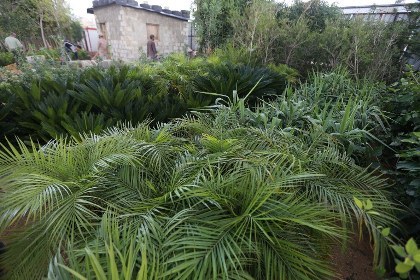 Lebanon's southern city of Sidon is best known for its Crusader castle and ancient market, but a more modern landmark has marred its Mediterranean shoreline for decades -- a towering "mountain" of trash.

In the summer, reeking fumes hung over the city, and fires broke out at the dump. Rubbish washed out to sea reaching Cyprus, 260 kilometers (160 miles) away in the Mediterranean, and was pushed across the city by winter storms.

But now an ambitious project is putting an end to the towering nightmare, transforming it into a seaside park that local officials hope will inspire others dealing with Lebanon's many dumps.

"We were talking about... a trash mountain right next to houses," said Mayor Mohammed al-Saudi, who came to office in the city of 200,000 pledging to deal with the dump.

The project began with the installation of a seawall around the eyesore site and the coastline to the south, preventing waves from impeding work or taking rubbish out to sea.

Then the site was closed to further deliveries, with the city's waste going to a new processing facility further south.

The mountain started life as a dump for rubble about 10 years into the country's 1975-1990 civil war, and tests showed around 60 percent of the heap was material from destroyed buildings.

When sorting began in mid-2013, much of that rubble was treated and used to reclaim land between the seawall and the beach in the area south of the dump.

Next year, 33,000 square meters of that land will open as a public park, planted with hundred-year-old olive trees and featuring a small amphitheater.

The rest of the dump was ploughed into a sanitary landfill, lined and covered with protective plastic membranes.

Pipes running through it will filter gas and remove effluent, and grass will be planted on top, but the landfill will be off limits to the public for eight years while the material underneath decomposes.

The project is "moving from that mountain of shame to something that Sidon will be very proud of hopefully," said Edgard Chehab from the United Nations Development Program, which oversaw the project.

"In eight years time, the landfill site will be joined with the green park that we are constructing now, and Sidon will enjoy 100,000 square meters of green park," he said.

But not everyone is impressed.

Mohammed Sarji, president of the Lebanese Union of Professional Divers and founder of the Bahr Lubnan (Sea of Lebanon) NGO, is angry that the land reclamation has covered over a long stretch of Sidon's sandy beach.

He said activists presented the municipality with a plan to recycle almost all of the trash mountain over a three-year period, for $10 million less than the current project cost.

Instead, Sarji alleges most of the trash was barely sorted and put straight into land reclamation.

"They simply dumped half of the mountain inside... the breakwater," he told AFP.

Chehab countered that scavengers had already removed much of the dump's recyclable material, and that most of the remainder was "completely degraded... and lost its recyclable value."

But he expressed surprise at the $25 million price tag, on top of $20 million spent on the seawall.

"For that I'd want gold to come out of the bottom of that site," he said.

Examining a breakdown of costs, he said the project still appeared "expensive, even for a large site and one in such a sensitive location."

Saudi dismissed the criticism, saying the "cheapest bid presented by a qualified company was chosen."

"The next cheapest bid was $40 million and we are satisfied with the choice."

He wants to see Sidon's project repeated elsewhere in Lebanon, which has more than 650 rubbish dumps of varying sizes despite being smaller than Wales.

Even Sarji acknowledged that the project had "achieved positive things," and other residents are effusive about the transformation.

"In the summer, the fumes from the mountain would suffocate the whole city, and the smell was terrible," said 58-year-old Hassan Arnaout.

"Now, they removed the whole mountain and they’re doing a park. They've done something really great for the area."