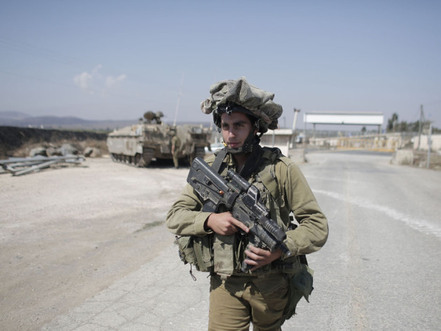 A Palestinian threw acid at a family of Israelis picking up a hitchhiker in the West Bank Friday before being shot and wounded, residents and the army said.

The incident came with tensions running high in the occupied territories after months of unrest, and follows the death of a senior Palestinian official this week in a confrontation with Israeli troops.

"A vehicle carrying a family with four girls stopped to pick up a hitchhiker" near a checkpoint outside Bethlehem and close to the Gush Etzion settlement area, an army statement said.

A Palestinian man standing next to the hitchhiker threw acid at both him and the family when the car stopped, it said.

Initially the army said the attacker was a hitchhiker but later revised its statement.

As the suspect fled the scene, a civilian passing by in his car tried to run him over before shooting him in the legs. He was then arrested. It was unclear how seriously he was wounded.

The Israelis were taken to hospital, an AFP photographer said, and emergency services confirmed they had suffered light wounds.

Palestinian residents said the attacker, 46-year-old Jamal Ghayyada, was mentally unstable and had received treatment at a clinic in Bethlehem.

Elsewhere, Israeli troops opened fire with live rounds at a group of 100 Palestinian demonstrators outside a military prison near Ramallah, hitting 10 of them in the legs, Palestinian medical sources said.

They were protesting against the death of Palestinian official Ziad Abu Ein who died on Wednesday after he was struck in the chest during the confrontation with Israeli soldiers.

The Palestinian leadership has blamed Israel for Abu Ein's death and has threatened a response, amid speculation the Palestinian Authority could suspend security coordination with Israel in the West Bank.

In Hebron, south of Bethlehem, several youths were also shot in the legs during clashes with soldiers, one with live rounds and three with rubber bullets.

Israeli ministers called for calm after the death of Abu Ein. U.S. Secretary of State John Kerry is to meet Prime Minister Benjamin Netanyahu in Rome Sunday as part of efforts to defuse tensions.

In November, a spate of deadly attacks in Jerusalem by lone Palestinians killed several Israelis.

In a mass march in the Gaza Strip on Thursday, demonstrators wielded placards that read "Jerusalem resists!".

Tens of thousands of Hamas supporters marched through Gaza City to mark 27 years since the formation of Islamist movement Hamas, de facto rulers of Gaza.

"Just as we liberated Gaza... we will repeat the experience in the West Bank," senior Hamas leader Mahmud al-Zahar said in a speech at a similar march in southern Gaza.

The burning alive in July of a Palestinian teenager in Jerusalem, a revenge attack for the murder of three Israeli teens in the West Bank, sparked months of unrest and led to a bloody 50-day summer war in the Gaza Strip between Israel and Hamas.

Israel blamed Hamas for the Israeli murders, and rounded up hundreds of its members in the West Bank.

Both sides claimed the Gaza conflict as a victory.