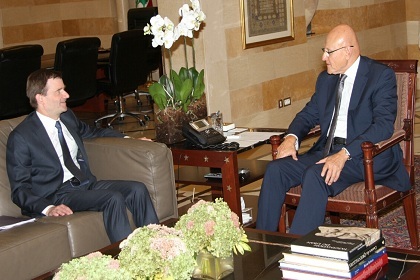 U.S. Ambassador to Lebanon David Hale highlighted on Tuesday the international support for Lebanon in the security field and in coping with the burden of Syrian refugees.

He said: “With such broad support, there should be no question that the Lebanese can and should elect a president, away from foreign agendas or interference.”

He made his remarks after holding talks with Prime Minister Tammam Salam.

“The choice of a president should be for the Lebanese alone, but should be made urgently,” Hale added.

“I believe that once such a choice is made, the international community will support the outcome,” remarked the ambassador.

“There is no cause or rationale for delay, and there should be no expectation of future external events that might influence the outcome one way or the other,” he continued.

“To wait is to invite instability and the further erosion of the institution of the presidency. To proceed with electing a president will serve the interest of Lebanon and the Lebanese people,” he explained.

Hale said: “The burden on Lebanon and Lebanese communities hosting refugees is great. The tolerance and generosity shown by the Lebanese people toward those fleeing violence in Syria are remarkable.”

“And the gap in unmet needs to house, feed, clothe and to attend to the needs of the refugees is still far too great. The American people have also demonstrated generosity, with nearly $617 million in American assistance provided already, in Lebanon alone, to help meet those needs and those of host communities,” he noted.

“You can count on continued American support in the face of this humanitarian challenge, just as you can count on us and other partners on the security front,” he stressed.

“As Lebanon works to uphold its policy of dissociation from the conflict in Syria, international partners are giving Lebanon tangible means to do so,” Hale added.

“Rarely has there been such widespread support favoring Lebanese security and stability. The challenges remain significant, but I have great faith and confidence that Lebanon’s security services, with international support, can meet them,” stated the ambassador.

On Monday, Lebanon and the United Nations launched a Crisis Response Plan that calls for an estimated $2.1 billion to help the country cope with the fallout from the conflict in neighboring Syria.

Lebanon has taken in more than 1.2 million Syrian refugees since the uprising against President Bashar Assad began in March 2011. That influx has put a severe strain on Lebanon's infrastructure, economy and government services such as health and education.

The plan for Lebanon outlines the priorities of the government and international community over the next two years.

It aims to deliver humanitarian assistance to Syrian refugees while also expanding plans to invest in services and institutions in the most affected areas. It hopes to reach some 2.9 million people, half of them Lebanese.

God bless America. Merry Christmas to all the life loving people. LOVE to be affiliated with people who want to prosper, cooperate, get involved with their communities, people arround them, aid strangers in need make more peace and less enemies, demand justice and stop tyrants, avoid arrogant , ignorant gangs of sectarian armed fanatic groups... if not tthen different language should be spoken.