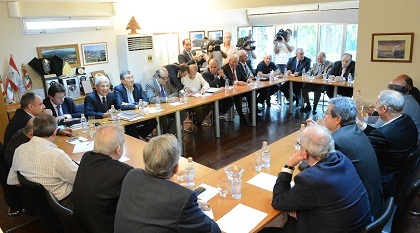 The Change and Reform parliamentary bloc noted Tuesday that the issue of freeing the captive servicemen through a swap deal was never raised in the cabinet's meetings, denying claims that it is obstructing such a move.

“Any claims that we are rejecting a swap deal are baseless, because no one has informed us in the cabinet meetings of the real demands of the kidnappers,” Education Minister Elias Bou Saad said after the bloc's weekly meeting in Rabieh.

“We are not against a swap deal but we want the release of the servicemen while preserving the state's prestige and its laws and we'll do whatever we can to return the servicemen to their families,” the minister added.

Free Patriotic Movement leader MP Michel Aoun “has said that the state cannot negotiate with terrorists and he did not mention the issue of a swap deal,” Bou Saab clarified.

The servicemen were abducted by jihadist militants in August during deadly clashes with the Lebanese army in and around the Bekaa border town of Arsal.

Four captives have been executed so far, and the jihadists have threatened to kill the remaining hostages unless there is a deal to free Islamist prisoners in Lebanon. The state has repeatedly refused to hold direct negotiations with the kidnappers.

“In the first cabinet session after the crisis, we were told that some parties had volunteered to negotiate with the gunmen and they asked for a 2-hour truce in return for the release of the servicemen. After that we did not know how the process moved forward and how the servicemen were kidnapped,” Bou Saab reminisced.

“A crisis cell was then created and it is exerting efforts and trying to find a solution, but (Foreign) Minister (Jebran) Bassil did not take part in any meetings because things were being tackled in a manner that cannot lead to quick results,” he added.

Separately, the minister stressed that the solution to the presidential crisis “must be Lebanese.”

“Everyone must realize that real partnership is the solution for Lebanon. The beginning of the solution is partnership and the end of the hegemony of one party over another,” Bou Saab said, adding that the bloc wants “a strong, open-minded president who enjoys wisdom and patriotism and has a history of sacrifices.”

“We would overcome the current crisis when everyone realizes that a strong president is one who has a large popular base,” said Bou Saab.

FPM chief Aoun is still the candidate of the March 8 camp in the face of Lebanese Forces leader Samir Geagea, the nominee of the March 14 forces.

“We would overcome the current crisis when everyone realizes that a strong president is one who has a large popular base,” said Bou Saab.

A large popular base, ya3ne not a large orange base...

"Change and Reform Says a Prisoner Swap was Never Raised in Cabinet"
So all this time what were you discussing? swapping tomatoes for potatoes? Pathetic!

Kanaan: Equal power-sharing is not being respected.

was equal power sharing respected when you and HA shared a one sided government for 2 years. Shame on such a party that rewrites history whimsically.

Any christian following a traitor, is a traitor himself.

"The one who accepts evil without fighting against, is cooperating with it" (Martin Luther King)

then why are you allied with those who did? shame.

Aoun is a disaster on Lebanese Christians.

geha you are being too specific

the issue here is that ''they'' praise democracy as long as ''they'' can take advantage from it (here you have to understand: money to steal)...Flame, not worth discussing any obvious point with these guys 'de mauvaise foi'...
My respect !!!

they no longer exist, aoun does not need to use their plight for political gain, doing so will embarrass his ally.