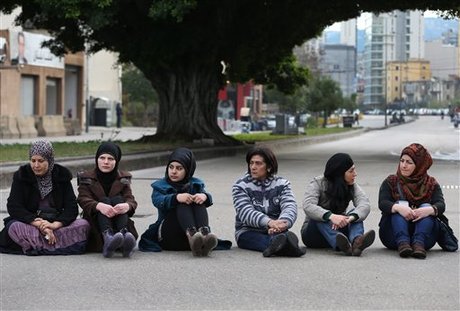 The extremist al-Nusra Front and Islamic State groups on Tuesday launched fresh threats to execute the Lebanese troops and policemen who are in their custody, as the so-called ministerial crisis cell failed anew to appease the servicemen's distressed families.

“The Islamic State group has given the government until Thursday to fulfill its demands or face the execution of two troops,” a Syrian source in Syria's Qalamun told MTV.

Sky New Arabia meanwhile reported that “al-Nusra Front has threatened to kill another Lebanese soldier if the government does not meet its demands.”

The reports prompted the families of the servicemen to burn tires outside the government's headquarters in downtown Beirut.

Al-Nusra and the IS have more than 25 troops and policemen in their custody. The servicemen were taken hostage during the deadly Arsal clashes in early August.

After Qatar ended its mediation on December 7, the families demanded a role for the Muslim Scholars Committee in the negotiations, but the Lebanese government has so far refrained from granting the committee an official authorization.

The name of Muslim cleric Sheikh Wissam al-Masri has recently surfaced in media reports claiming that he had been named as a possible mediator by al-Nusra Front.

However, the reports were refuted Tuesday by a “prominent al-Nusra Front leader.”

“We have not issued any statement tasking Sheikh Wissam al-Masri or any mediator with negotiations over the Lebanese servicemen,” the Nusra official told Turkey's Anatolia news agency.

Meanwhile, Interior Minister Nouhad al-Mashnouq denied allegations by Free Shia Movement chief Sheikh Mohammed al-Hajj Hassan, who quoted the minister as saying that “the government will consider the captives as martyrs of war.”

“These remarks are totally baseless and Minister al-Mashnouq has not announced or leaked any information related to the case of the captive servicemen, other than saying that there will be no negotiations with the captors before they offer written pledges on halting executions,” Mashnouq's press office said.

Also on Tuesday, the so-called ministerial crisis cell held a meeting at the Grand Serail under Prime Minister Tammam Salam to discuss the developments of the case.

The cell did not announce any resolutions after the talks but Finance Minister Ali Hassan Khalil had said prior to the meeting that the conferees would “reiterate the need to take serious measures to release the captive servicemen.”

The meeting was also supposed to “settle the identity of the negotiators and the negotiations' mechanism,” said Khalil.

Al-Mashnouq for his part denied the presence of any “chaos” in the crisis cell, noting that “the channel of negotiations is well-known and (General Security chief) Maj. Gen. Abbas Ibrahim is the head of the security group and everyone agrees on this.”