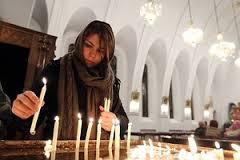 The three Iranians were arrested in 2011 in Karaj, where they had set up underground churches.

They were found guilty in October on charges of "action against national security" and of "creating a network to overthrow the system".

An appeals court in the Islamic republic dropped the charges in a hearing on December 9, said the Britain-based association.

"We continue to call on the Iranian government to... allow the country's religious minorities to enjoy freedom of religion or belief as guaranteed under Iran’s own constitution," the NGO said.

The Iranian constitution recognizes the rights of certain religious minorities, including Christians, but apostasy is punishable by death under the country's Islamic sharia laws.

This is what'll happen if HA gets what they want, Christians are used by them just as much as ISIS.

Lol, Sunnis kill thousands of Christians around the world, yet this is what riles you up?

If and when one finally gets elected.