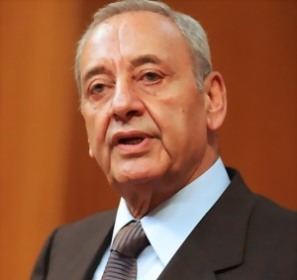 Speaker Nabih Berri has said that the suspension of the Lebanese Forces' participation in discussions on an electoral draft-law would not impede the work of the parliamentary subcommittee that is dealing with the matter.

Berri told his visitors that the LF stance “does not end the work of the committee nor suspends the deadline set for it until the start of the new year.”

LF MP George Adwan said on Tuesday that “the subcommittee is only passing time until a settlement is reached regarding the presidential post.”

Adwan called on the rival parties to head to the parliament to vote on a new electoral law whether a breakthrough is reached or not.

But Berri, whose remarks were published in local dailies on Wednesday, said that the parliament could not adopt the law in the absence of a president.

“We should wait for his election so that he has a say in it,” said the speaker.

“We can't head to parliament as the LF is asking us to do so that we don't overrun the role of the president,” he added.

Lebanon has been without a head of state since Michel Suleiman's six-year term ended in May over political differences between the rival parties.

Berri met on Wednesday with MP Robert Ghanem, the head of the 11-member parliamentary subcommittee, which has been tasked with discussing a hybrid electoral draft-law.

"The speaker will continue his consultations in hope for a breakthrough in the discussions over a new electoral law," said the lawmaker after his talks with Berri in Ain el-Tineh.

He added the subcommittee's meeting, which was scheduled to be held on Thursday, was postponed until after the holidays.

Berri was asked by his visitors about the much anticipated dialogue between Hizbullah and al-Mustaqbal movement.

“There is still hope to hold the dialogue's first session between Christmas and New Year,” he said.

The rival parties have agreed on his proposal to put the presidential deadlock and the electoral draft-law on the agenda of their talks, he said.

Finance Minister Ali Hassan Khalil, who is Berri's aide, and Nader Hariri, the adviser of al-Mustaqbal movement Saad Hariri, met on Tuesday to discuss the agenda.

may you RIP flamethrower

The caporal and allies have been sabotaging the process of finding an agreement for a new law....sabotaging and paralyzing the system and the whole country...
Yalla followers...keep on following the traitor...