Al-Rahi during Christmas Mass: Who Else Besides President Seeks Lebanon's Interests? 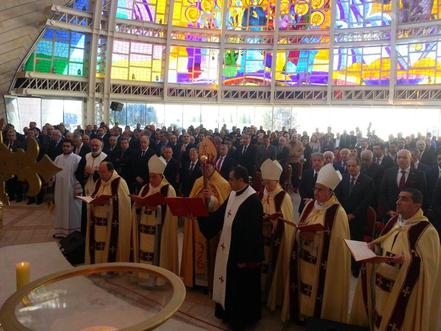 Maronite Patriarch Beshara al-Rahi lamented on Thursday the ongoing vacuum in the presidency, hoping for the election of a new president.

He wondered: “Who else besides the president seeks the interests of Lebanon?”

He made his remarks during Christmas mass that was held at Bkirki and attended by a number of officials, including Free Patriotic Movement leader MP Michel Aoun, Kataeb Party chief Amin Gemayel, and U.S. Ambassador to Lebanon David Hale.

“We wonder at claims that Lebanon is working fine without a president,” al-Rahi said.

“Who else can ease tensions and cater to the people's needs besides the president?” he asked.

“Who else besides the president seeks the interests of our youth?” he continued.

“We hope that officials would realize the dangers of failing to elect a new head of state,” remarked the patriarch.

“The absence of a president will create chaos and spread corruption,” he stressed.

Prior to holding the mass, al-Rahi had separate talks with Aoun and Progressive Socialist Party leader MP Walid Jumblat.

- “Who else besides the president seeks the interests of Lebanon?”
errr... Jesus?

Those that want to make it look humoristic this is what I have to say: had it not been for our Lord Jesus, Lebanon would have shared the fate of countries like Syria and Iraq. Now please let's separate apples form onions shall we?

Dear Batrak,
Please denounce the Caporal who is working against the interests of the Christians. He is destroying the Christians, the institutions and the whole country.
Merry Christmas. May the Peace announced by the savior fills the heart of good men.

May you RIP this Christmas dear Flamethrower

Who Else Besides President Seeks Lebanon's Interests?

Umm, Hezbollah without them ISIL would be in Jounieh busy manning checkpoints remember?

To be honest that wasnt the most accurate comment by the patriarch.