Iraq, Turkey Pledge to Join Hands to Fight IS Jihadists 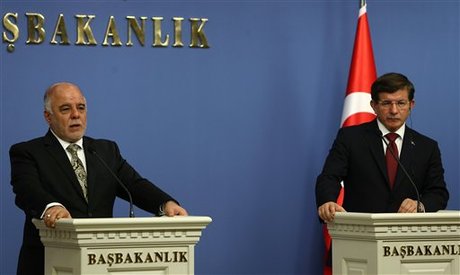 Iraq and Turkey on Thursday pledged to join forces to fight Islamic State insurgents who are holding swathes of Iraq and Syria.

"ISIS threatens not only Iraq's and Turkey's security but the entire region," Iraqi Prime Minister Haidar al-Abadi told a joint news conference with his Turkish counterpart, Ahmet Davutoglu, using an alternative name for IS jihadists.

Turkey, a vocal critic of Syrian President Bashar al-Assad's regime, has faced international criticism for letting radicals pass through its territory to fight in Syria.

Ankara wants a wider strategy for Syria that would ultimately bring Assad's downfall. It has repeatedly called for a buffer zone, backed by a no-fly zone, to be put in place inside the war-torn country on the Turkish border.

"We can defeat this organisation by uniting all our powers, with the support of the countries in the region," al-Abadi said, in translated remarks.

"We are open to any idea" to extend further support to Baghdad, he said.

Turkey and Iraq shared a "common approach to fight all terrorist organizations in the region" including the IS and the outlawed Kurdistan Workers' Party (PKK), Davutoglu said.

"We are ready to give any kind of support against terrorist organizations including those who have emerged in recent times like (IS) as well as the PKK which launches attacks against Turkey by using Iraqi soil," he said.

Iraq is battling to retake large areas overrun by the jihadist group while Turkey borders territory which the militants control in neighboring Syria.

The Iraqi prime minister said that Iraqi security forces and peshmerga fighters were "rapidly" pushing out the insurgents from areas under their control.

Al-Abadi's visit to Turkey follows a trip to Iraq by Davutoglu in November -- in a sign of a thaw in bilateral ties which were strained in recent years over a number of issues including Ankara's move to aid Iraqi Kurds independently export oil.

"We want to export oil through Turkey," the Iraqi premier said. "It is in Iraq's interest."