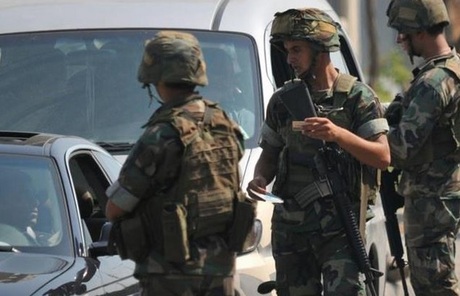 The army announced Sunday that its new, strict measures on the roads leading to the outskirts of the border town of Arsal are aimed at protecting the residents, in the wake of a demonstration protesting the move.

“The military institution has stressed that the army's new measures on the roads leading to the mountains are aimed at protecting Arsal's residents from the movements of the terrorists,” state-run National News Agency reported.

Earlier on Sunday, troops dispersed demonstrators who blocked the road in Arsal's Ain al-Shaab to protest tight security measures set to be implemented at the beginning of the new year.

Media reports said that around 200 people blocked the road with burning tires to protest the measures that the army intends to implement in the town in order to suppress gunmen from al-Qaida-linked al-Nusra Front and the Islamic State group who are entrenched in the outskirts of Arsal on the porous Syrian-Lebanese border.

Arsal municipal chief Ali al-Hujeiri and Sheikh Mustafa al-Hujeiri, who is also known as Abu Taqiyeh, also called on the owners of stone crushing plants to protest in Wadi Hmeid the army's measures in the town.

Mustafa al-Hujeiri is wanted by Lebanese authorities on charges of belonging to al-Nusra Front.

NNA had reported on Saturday that the army informed the residents of Arsal that “as of January 1, Syrian and Lebanese nationals will not be able to cross into the outskirts of Arsal through the Wadi Hmeid checkpoint without prior approval from the army intelligence.”

“Any person seeking to head to the outskirts of the town should file a request at the army intelligence branch in the Bekaa to be granted the necessary approval.”

The Army have had too many martyrs, to let the M14 tie their hands any longer. I'm sure M14 set these protesters up, in order to smear the army.

Not aslong as those people you want to roam freely, are the same ones that cuts off heads, eat their organs and slit babies throats. Dream on ya takfiri

may all your life savings be in Russian Ruble... RIP Flamethrower

how about we do the same to your dahyeh

I would like to see the Statue of Liberty hold the flag of ISIS, instead of the torch with no head. That would be more appropriate for you hated Americans.

Americans created ISIS. You might aswell be proud of it.

you already tried this in 2006 liberty, only to see dahiyeh rise again higher and stronger.

and so now, how about we do the same to your tel aviv?