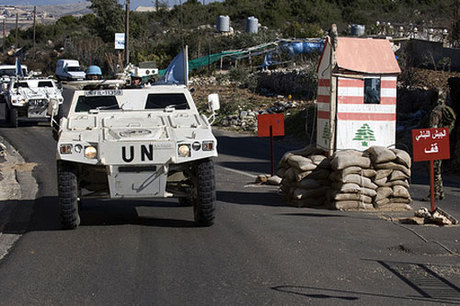 Media reports said Israel has obtained information that Hizbullah is investing a large sum of money to acquire undersea weapons and delivery systems to carry out attacks against the Jewish state.

A similar barrier has been deployed off the Gaza Strip.

But Israel killed 1,200 people in Lebanon, most of them civilians, according to the United Nations. Hizbullah killed 160 Israelis, most of them soldiers within Lebanese territory.

Sonar array systems, Iron dome. Whatever shield they think will protect them, the resistance will burst through them all. The next war will be nothing in comparisson to 2006 july.

To all you supporters of Israel -

Mystic - you still have no clue how to build a strong nation!

Tell us way do you want a next war. Do you want another 2006 with destructions and killings. Even though hiizbollah may be stronger than before what will another war achieve besides destructions in Lebanon? Of course hiizbollah and Iran do not care about lebanon. They only care about waging another war to acquire further legitimacy as an opponent to Israel. When we see that the Palestinians are pushing for peace while Iran and hiizbollah pushing for war we can understand that the only raisin d'être of the Islamic Shiite revolution is to continuously strive on a state if war.

Hey yo yo, we did not forget who took the palestinian camps hostages killing them ... palestine cause have nothing todo with people like you. Another silly excuse ny revolutionary guards to keep stacking their weapons of hate.

There we go again with Mystic's bombastic rhetoric. The next war what ya Mystic? Last war gave us well above 1000 dead, well above that maimed, properties destroyed, the economy back to ground zero. You're talking of a next time, and people like me are talking that there will be no next time, your time is now in Syria, try to get yourselves out of that quagmire first before you buy yourself some cheap propaganda. Then calling people as cowards, clean first your own doorsteps. In Syria you've been documented killing unarmed civilians, now I don't know what has such genocidal actions got to do with nobleness or bravery. FYI, Lebanon is our country too and Hezbollah cannot behave as if only it owned it. The time will come when you will butt your heads against a hard wall and it's called the people of Lebanon, not Israel, but we the people.

Unarmed civilians ya phoenix? You should rather look at the LF and Kataeb on that subject ya zalame, they are popular for their massacres.

What people of Lebanon are you talking about? Ofcourse the M14 always hated the Resistance, and you cheered when the Israelis bombed our heads.

You always supported Israel all along, nothing honorable about you people, you seek a pro Israeli Lebanon, that will seek peace to all the west. You can be all calm phoenix, you are one of those immigrants that lives outside Lebanon.

We heard the same words from your kind. During the 2006 war, you wanted us all to sit and die, while Israel bombed.

you are right mystic, the next war will be the end of us. total destruction.
there is no winner in a war only innocent deaths and destruction

Amusing to see you cowards from the M14, you always complain when there is no fight between the two. When it actually happens, you all say "Nooo stop it!" you have no guts. We all know who you are weaklings.

Every pro resistance person in Lebanon, are ready to sacrifice their children and themselves if such a war occurs.

Mystic we do not want to sacrifice ourselves not our children for a war. We want to live and create a better environment for our children to live in. History teaches us that war has never been a solution towards a better future. Only peace can achieve this.

Israel are using such people, to wage war against the Resistance. Just like they started the war in Syria, to weaken a sovereign state, whom defended palestinian refugees for generations.

The takfiris are a tool of Israel & USA, nothing else. We see how the takfiris in Golan, enjoys medical treatment and else from the IDF.

Mystic, you said, "Every pro resistance person in Lebanon, are ready to sacrifice their children and themselves if such a war occurs". Where in Syria? Well, good luck, you now need every bit of it.

In Syria, Lebanon whereever rockets can be fired from. The Israelis were very precise not to hit any M14 areas, during the 2006 war, so why do you talk about the Lebanese people as a whole? You supported a foreign enemy that bombed and destroyed Lebanese infastructure.

We know very well, who your kind is phoenix. You don't have to lecture me, it is no use.

I thought after UN resolution there is no more contact between HizEbola and Israel! Who is asking for this war?

To My stick, up, you see how wrong you are? People of my city mostly 70% pro m14 and m14 politicians where following displaced to provide them with shelter and food, regardless of political difference. Inreturn we sow people that were so ungrateful! After all we are helping people who are sectarian to the bone. WITNESSES said every time food delivered and leave middle fingers raised by the educated people.
The paranoid resistance is aimed to increase GhizEbola's power above any other Lebanese, simple truth.

To Bigon Poison Up , The idiots, can't produce a response just by using an argument on what country I live in now, I respect Canada and proud to support the country against terrorists like you ... but of respect.. In any case I am still considered to be born in Lebanon.

My thoughts exactly. Imagine what these vast amounts of money used on destructive weapons and behaviour would have done for the poor areas in southern Lebanon, or for the economy and employment in Dahiye. But oviously there is still a strong, stone-age-like mentality where power and pride is closely connected with the biggest weaponry. Hezbollah is dragging the shia sect backwards, and the co-Lebanese are helpless hostages waiting in fear for the next deadly war.

Mystic: You know what they say in funerals? Ashes to Ashes, dust to dust. take a good picture of Lebanon, if the beauty will remain it is in Lebanese hands. 8 times Arabs tried to liquidate Israel and lost. Israel can not afford to lose a war although many Arabs dream about it day and night. but Frankly speaking Mystic: Does Arabs really need Israel to make wars with them? As Arabs are killing each other with a great success without Israeli involvement. so just from the thought what will remain of Israel if they will fall into those savages hands will make the Israelis fight better and develop better equipment. It can be avoided Mystic if less bloodthirsty people like you will look for war and ready to fight till the last drop of your children. well against stupidity we are all helpless.

To the not so Smart resistance-claimers here, aren't you ashamed of selling "your" country to the highest bidder whether Iran or the devil or who ever it is? Aren't you playing a role that have no end except the armgeddon war written by your fake mullas to bring the " mehdi" faster, If you have faith in that to begin with? Where are your brains and the will to question the disaster you being taken to? Resistance 3ala rasi, but alone shi3a resisting ? Seem like a good tool for keeping arms to force your self above the rest of Lebanese fractions. SHAME on every person who would bring us to another distruction when Israel itself closed the gates and throw the keys to find The GhizEbola Provoking .. clearly, ... this time the voice of ghizos kids here think we should do it again, seems like these kids are, not equipped to learn.

I am proud of every Canadian and every person that think how to make his or her country the best, the culture of Prosperity and life loving does not suit your dark death mullahs culture.

Bigjohn said:
"Do we have here Zionist thugs masquarading as Lebanese who want peace with Israeli criminal hegemony??? Gee, I never read so much peace and love here...ONLY towards the Zionist criminal regime!"

I pity the one that cannot comprehend that real Lebanese can express their wish for peace, their view on non-violence as the strongest weapon, their feeling of intimidation by a sectarian militia not only out of lebanese government control, but under a foreign government control. I guess many of these real lebanese like me dislike Israels policies that gives militias and extremists the excuse to justify keeping the whole population as hostages in the balance of terror. Two wrongs does not make one right. I dont believe in Hezbollahs solutions to the problems, and I am 100% that the majority of real lebanese feels the same.

Big John- out of curiosity, do you currently live within the areas that fight for self-determination, Anti-Colonialism, Anti-Racism, and Anti-Imperialism? or do you live in the satan driven, imperialistic USA or another western country?