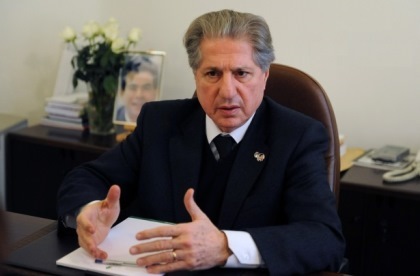 “We encourage dialogue between all (party) leaderships to salvage the Republic,” Gemayel told al-Mustaqbal newspaper in remarks published on Monday.

He hoped the dialogue between Aoun and Geagea would lead to positive results.

Gemayel also expressed hope that the talks between them would focus on “saving the constitutional institutions, which have reached a state of decay.”

He stated that he had no information or details about the expected talks but that he encourages efforts to preserve the interest of the nation.

Reports have said that Melhem Riachi, chairman of the LF communication department, and MP Ibrahim Kanaan from Aoun's Change and Reform bloc are holding meetings away from the media spotlight to prepare the agenda for the dialogue between the FPM chief and Geagea.

Kanaan told As Safir daily on Monday that the talks could create a basis for a joint mission.

“We cannot disagree on constitutional issues linked to partnership and (the division of) power,” he said.

Highly-informed sources also said that consultations on the agenda are reaching a breakthrough with the presidential crisis as a first item.

Both Aoun and Geagea have announced their candidacies for the presidency. Their differences, in addition to the rivalry between the March 8 and 14 alliances, have left the presidential post vacant.

Gemayel also expressed hope that the talks between them would focus on “saving the constitutional institutions, which have reached a state of decay.”

Ya Amin, if they are already decayed, how can they be saved???

Ya Amin, dispite all the assassinations in your family, you also did nit learn the lessons. Let Sami be candidate. Not you for God sake.

Dear Mr. Gemayel, of all people, you should know best who Aoun truly is. You appointed him as interim PM in the late eighties, what did he do then once in Baabda? Did he not hijack the constitution instead of keeping the country on its rails till a new president was appointed? Did he not engage us into wars all sordid the least to say? I am one of those people who always go first for dialog, patient dialog, but with Aoun one can't but be skeptical especially knowing what keeps buzzing in his head. Aoun will stab you and us all in the back as usual, and time and resources will once again be wasted over this old grumpy lunatic.

Untrue. In taif accords the Syrians were supposed to leave Lebanon. Hariri tried hard to get bathe Syrians to agree to leave Lebanon, whereas the Syrians killed Rene Moawad who challenged them. They put puppet Emile Lahoud and extend his presidency. When hariri pushed for 1559 and was going to win the parliamentary elections, he was assassinated by your dear friends the Syrians.

The taif accords are not a bad thing for lebanon as it brought an end to the civil war and balanced to political responsibilities among the communities. Yes the Christians did loose political power but their share prior to Taif was disproportional. They were over resented in the political and administrative jobs while other communities were under represented.
maid is far from perfect and can be adjusted and improved. If anythings Taif gives more power for the Christians as it reserves half the parliamentary seats for them while the Christians count for less than 50pct of the population. Yet no one is challenging this as all the communities agree on this share. We should be working on improving taif for better re presentation of the population, improve the electoral law and implement decentralization.

The flaw but also the Bertie of Taif is that unless all the communities agree it does not work. Neither the oresident, not the prime minister or head of parliament can decide alone. So what we are experiencing right now in terms of vacuum and paralyzed institutions is not due to Raed but due to the disagreement among lebanese. When seniora pushed to ban hiizbollah telephone network we had a short civil war in 2008. Now at least nothing happens unless all agree.

The fundamental issue is not taif but our agreement in Lebanon. Do we want an arm free Lebanon besides the army and police? Do we want an independent Lebanon or a Lebanon under the hegemony of Iran and Syria? Do we want strong institutions that care for the prosperity and future of the lebanese.

I have my dear DF and it turns out not to be the orange book. Reasonable No?

I do think that you are analysis about the Sunni rise is hugely wrong:
First, Hariri has not acted as Sunni leader, but more of a Lebanese leader. He has not favored the sunni community over other communities neither in infrastructure, nor in funding nor in political power (that is not to say that he has not hugely profited economically himself or his friends. He indeed took great advantage from Solidere treating unjustly the owners regardless wether they were sunni or from other communities).

Indeed, the Assad regime is a dictatorship where a minority of Alawites are ruling a majority of the Sunni Syrian population. This situation is greatly unstable and could only last under a tyrannic regime, imposing a state of emergency since 1970 and spending 70% of Syria GDP on arms.

You say that the Sunnis were never loyal to Lebanon is just an incredible thing to say.

They were in fact loyal to Lebanon in 1943 when the National Pact was done. Some of the Lebanese Sunnis where indeed disloyal to the Lebanon due to two factors: 1) Sunni were pushed aside by the Christians leadership who confiscated most of the power to itself, 2) Sunnis nostalgia to the Arab Unity.
Since the end of the civil war, the Taif agreement, and the political engagement of Hariri towards reconstructing strong Lebanese institutions, the Sunnis have not voiced nor shown any disloyal behavior against Lebanon.
Not long ago, the Tripoli inhabitant showed a remarkable support to the army which was fighting islamist extremists.
In fact the Sunni leadership in Lebanon has shown a lot of moderation and outright support for the Lebanese institutions.

Nice debate guys. Let me say a couple things: De facto, Aoun's war with Syria was flawed because he collaborated with Hobeiqa to smuggle 130mm artillery shells and fuel through Dhour Chweir, while also taking photographs of Ouwwet positions (Dhour Chweir was controlled by Syria and Hobeiqa was Aoun's ticket in. Aoun used Syria's help to fight Ouwwet.

Rafiq Hariri helped rebuild Beirut, but he was the most corrupt person in Lebanon. His company Solidere took over lands via eminent domain. He forced people to sell their lands at 15% the value of their properties. If they didn't comply they were evicted. Hariri gave kickbacks to important politicians, and when people got upset, demonstrations were banned. Hariri had around a billion dollars in 1992, and when he died in 2005 he had 16 billion.

What brings these guys to the table? Concern or love of country? For Lebanon? No, let us not be naïve. Aoun and Geagea have been in a state of war with each other since 1989 and maybe before. Their war got "hot" in 1990. The fact that Aoun fled to Paris and Geagea was confined to the prison at Yarzi did not end the war, only the means by which it was conducted. Since 2005, when Aoun returned from Paris under a promise from Assad not to prosecute him if Aoun performed certain duties toward Hezbollah and Geagea's sentence was commuted, the war has resumed.

If you take all Lebanese, including expats, Christians are over 70%. It's just inside Lebanon where Christians are the minority. The Sunnis of Lebanon will continue to be controlled by Hariri who will continue to push KSA's agenda. Guys like Sanioura who worked in Rafiq's cabinet (Sanioura was finance minister lmao) will have a say in Mustaqbal's affairs until the day they die.

As with all wars, they come to an end when the ability to wage a hot war is at an end. When one runs of out men, material, or funds and there is nothing else to win by military means, then there are truce talks.
This has happened between Geagea and Aoun. Certain political and economic realities in the region caused by Dae3g and the falling price of oil has rendered Aoun a disposable commodity by his Iranian patrons. Unable to continue to pay him Iran has let him see the end of the stream of money that once flowed to FPM.
Daeeg has also changed equations. The Iranian/Saudi contest in Syria is on a temporary hiatus as Dae3g has posed a common threat to both the Royal Family and to Shia Islam so that, for a time, there is a coming together of these two principals to defeat this common enemy, Dae3g. once that is done, then the contest will be on again to fight for confessional supremecy in the region.

It is this Hiatus, along with sanctions on Iran and the plummeting oil prices that have created this window where Aoun is forced to negotiate his position. Lebanon needs a President. It needs a Christian head of the army so that the LAF, as it goes about the task of containing Dae3g next Spring will not be seen as a wing of the Hezbollah or of the Mustaqbel, but will be acting under the aegis of restored legitimate institutions of the Lebanese Government. It is now in the interests of all parties that this happen.
Dae3g has already had their meeting with Nusra in Qalamoun and have planned to come into Lebanon via Arsel and a push to the sea at Tripoli to secure a port for the Dae3g once the Winter season is over and the Spring fighting season commences. So this meeting is the Christian last chance to have a bona fide Maronite in office. If they fail, again, then the Hezbollah and Mustaqbel will install a consensus Maronite of their choosing.