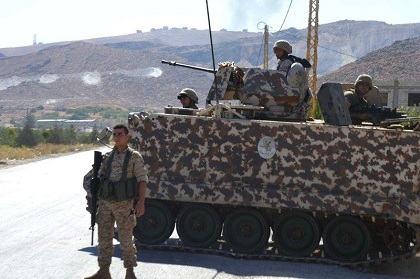 The army opened fire in the air on Monday to disperse protesters near Arsal's Wadi Hmeid crossing, demonstrating against the measures in the area.

The state-run National News Agency reported that Lebanese and Syrian nationals held a sit-in near Wadi Hmeid crossing to protest the army's upped security measures along the outskirts of Arsal.

NNA said that a spat occurred between the protesters and the army, prompting troops to open fire in the air to disperse them.

Military sources told LBCI that some 150 protesters from Arsal intentionally quarreled with the troops despite facilitating their movement to their jobs.

Five people were wounded in the dispute and the army detained five others, LBCI reported.

On Sunday, some 200 Arsal residents protested the army's measures in Arsal, however, the military clarified in a communique that its new, strict measures on the roads leading to the outskirts of the town aim at protecting the villagers.

It was overran in August by gunmen belonging to the two al-Nusra Front and the Islamic State of Iraq and the Levant (ISIL), who withdrew from the town by taking several soldiers and policemen hostage. Four have been so far executed.

they should be like your dahyeh .. they love the army

Wait a second! These people are protesting and we have Ras Baalbeck and Arsal with problems with ISIS/Nusra every other day. Are you kidding me? Why is the army there with tighter security? For their health? I mean we had 20 soldiers captured there? This is really the hot spot in the entire country. I understand we have Jaafer and Mekdad kidnapping people left and right, but that is a separate issue.