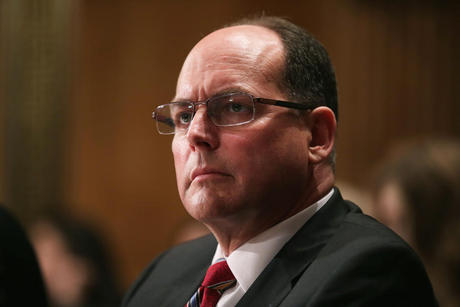 The CIA's inspector general will resign this month but U.S. officials said Monday his departure is not related to his finding last year that the spy agency hacked into computers used by Senate aides.

The agency's internal watchdog, David Buckley, will be stepping down on January 31, and his move "has been in the works for months," CIA spokesman Christopher White told Agence France Presse.

"After a long and distinguished career in public service, he is pursuing an opportunity in the private sector and there are no reasons for his leaving other than that," White said.

Buckley found himself in the middle of a tense confrontation last year between the Central Intelligence Agency and the Senate Intelligence Committee over a report by lawmakers into the spy service's use of torture over the past decade.

The findings confirmed suspicions by Democrats on the intelligence committee that the spy agency was trying to prevent staff members from seeing an internal agency review into torture and abuse during ex-president George W. Bush's presidency.

CIA Director John Brennan had to issue an apology. But the spy agency chief has appealed the inspector general's account to an "accountability board" led by a former senator, Evan Bayh.

The hacking focused on a document known as the Panetta Review, an internal probe commissioned by former CIA director Leon Panetta examining the extent that torture was used by interrogators of terror suspects. The document has yet to be released publicly.

Despite the controversy, the current CIA chief praised Buckley's service over the past four years in a statement to the agency's work force.

"David has made important contributions to the agency and strengthened the Office of Inspector General, improving its ability to uncover and prevent waste, fraud, abuse, and mismanagement," Brennan said.

Christopher Sharpley, who is now Buckley's deputy, will serve as the acting inspector general.

Success will be punished.