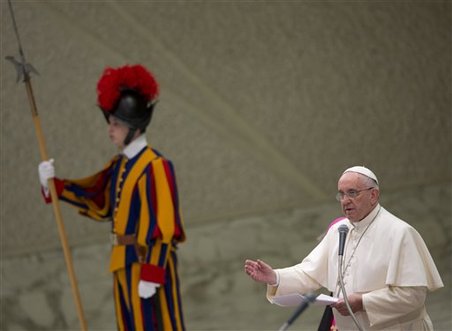 Pope Francis celebrated mass for the victims of the attack on the satirical weekly Charlie Hebdo on Thursday, praying for all those affected by an Islamist assault which left 12 people dead.

"The terror attack in Paris brings to mind so much cruelty, human cruelty, so much terrorism, both isolated terrorism and of state terrorism," the 78-year old pontiff said according to Vatican radio.

"We pray for the victims of this cruelty, so many of them. And we pray also for the perpetrators of such cruelty, that the Lord might change their hearts," he said.

Following the early morning prayers in the chapel of the Santa Marta residence in the Vatican, where the pope lives, Francis posted the #PrayersForParis hashtag on Twitter.

The pontiff had earlier issued a strong condemnation of the "horrible attack" against the weekly, with a plea "to oppose, by all means, hatred and all forms of physical or moral violence that destroy human life or violate a person's dignity."

Shouting "Allahu akbar" ("God is greater") two heavily-armed men stormed the Paris headquarters of a satirical weekly on Wednesday, killing some of the country's most loved cartoonists in cold blood in the worst attack on French soil in decades.

The weekly received numerous threats for publishing cartoons of the Muslim prophet but was also a constant critic of the Roman Catholic Church and its leaders.