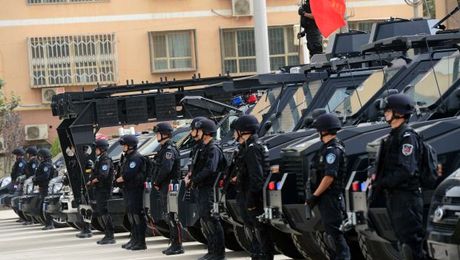 There were no police or civilian casualties, according to the report by Xinjiang's government-run Tianshan news site.

They called police, who opened fire after the attacker tried to set upon an officer with an axe and detonate the device, according to the report.

The assailant was killed, but soon afterwards five more attackers "sought to ignite explosive devices one after the other", Tianshan said.

The five were "resolutely" shot dead by police, it added.

Dilxat Raxit, spokesman for the overseas-based World Uyghur Congress, said in a statement: "China's allegations of a so-called terrorist attack are an excuse to cover up the excessive use of force."

He pointed to China's "hostile policies" in the region as having triggered unrest, without citing specifics.

Violence linked to Xinjiang has intensified over the past year, with at least 200 people killed in a series of clashes and increasingly sophisticated attacks in the resource-rich region and beyond it.

Beijing, which blames Xinjiang-related violence on "religious extremists", "separatists" and "terrorists", has responded by launching a severe crackdown in recent months, with hundreds of arrests and around 50 executions and death sentences publicly announced since June.

Rights groups argue that harsh police treatment of the Uighur minority, as well as government campaigns against religious practices such as the wearing of veils, have led to violence.

In December a court in the regional capital of Urumqi condemned eight people to death for two deadly attacks, one on the city's main train station and another on a market there.