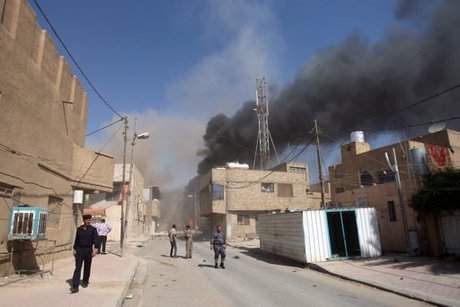 Iraqi forces retook control of a police headquarters in western Iraq on Monday after armed insurgents stormed it and took hostages in a two-hour siege that left the town's police chief dead.

Gunmen set off at least two explosions at around 10:00 am (07:00 GMT) before overrunning theal-Baghdadi police headquarters, which is in a compound that also houses the office of the town's mayor.

Military and police reinforcements had been dispatched to the town, which lies 150 kilometers northwest of Baghdad in predominantly Sunni Anbar province.

Meanwhile, a police officer in the town of Dolab, close to al-Baghdadi, said a similar attack was mounted on its police headquarters, with two suicide attackers blowing themselves up in front of the station.

A third suicide bomber was detained by police before he could set off his explosives, the major said. There were no casualties as a result of the attack.

The province was a key Sunni insurgent base in the years after the U.S.-led invasion of 2003, but since 2006 local tribes have sided with the American military and day-to-day violence has dropped dramatically.

Anbar, and particularly its capital, has been the target of frequent attacks in previous months.

In June, at least three explosions near provincial government offices in Ramadi killed 10 people and wounded 15 others. In January, a suicide bomber blew up an explosives-packed car carrying Anbar governor Qassim Mohammed Abid, but he was unhurt.

Provincial government offices were also targeted by attackers three times in 2010, and, on December 30, 2009, Abid lost his left hand in a suicide attack that killed 23 people and wounded 30.

Attacks are also still common nationwide. A total of 185 Iraqis were killed in violence in September, according to official figures.