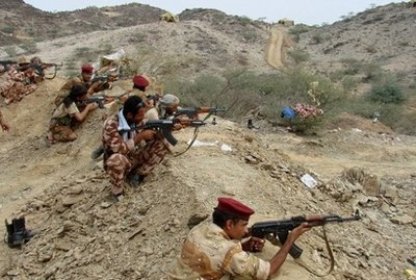 A drone strike killed three suspected al-Qaida militants in Yemen on Monday after Washington vowed to carry on its campaign against the jihadist group despite the country's ongoing political crisis.

The U.S. embassy in Sanaa, meanwhile, announced on its website that it was closed to the public until further notice due to security concerns.

U.S. President Barack Obama on Sunday insisted Washington would pursue its efforts against al-Qaida in Yemen regardless of upheaval that has seen Western-backed President Abdrabuh Mansur Hadi tender his resignation.

U.N. envoy Jamel Benomar met with Huthi leaders and members of other parties as part of a bid to broker an agreement after the Shiite militia seized the presidential palace last week.

"He has been convening and chairing daily meetings with 16 political parties in order to build consensus on a way forward," U.N. spokesman Stephane Dujarric said.

In the latest unrest on Monday, the Huthi militiamen attacked protesters gathered at Sanaa University to demonstrate against their occupation of the capital.

Monday's drone strike saw an unmanned aircraft, which only the United States operates in the region, fire four missiles at a vehicle in a desert area east of Sanaa, killing three suspected al-Qaida militants, a tribal source told AFP.

Yemeni authorities have for years allowed Washington to carry out strikes against al-Qaida in the Arabian Peninsula, the local branch of the jihadist network which claimed responsibility for this month's deadly attack on French satirical weekly Charlie Hebdo.

In India on Sunday, Obama had vowed the United States would "continue to go after high-value targets inside of Yemen".

"Washington will continue its campaign, regardless of who will be sitting on Yemen's presidential chair, and regardless of whether the chair is empty or filled," said Khaled Fattah, a Yemen expert at the Carnegie Middle East Center.

Hadi resigned on Thursday after the Huthis kidnapped his chief of staff and seized key buildings across the capital.

The unrest has raised fears of strategically important Yemen, which lies next to oil-rich Saudi Arabia and along key shipping routes, collapsing into a failed state.

In a message on its website, Washington's mission in Sanaa said: "The U.S. Department of State warns U.S. citizens of the high security threat level in Yemen due to terrorist activities and civil unrest".

It urged U.S. citizens "not to travel to Yemen" and those in the country to "make plans to depart immediately."

On Monday, Huthis armed with daggers attacked protesters gathered inside the campus of Sanaa University to demonstrate against them, leaving 10 people wounded, activists said.

The Huthis had earlier blocked access to the university and the nearby Change Square with roadblocks in a bid to prevent demonstrations.

The Huthis, who descended from their base in Yemen's rugged north to overrun the capital in September, fired in the air on Sunday to disperse a protest at Change Square and detained several activists and reporters.

The journalists were released after signing pledges not to cover demonstrations, according to an activist, Mohammed al-Saadi.

Four political parties negotiating with the Huthis to bring the country out of crisis announced late Sunday they were ending contact with the militia.

Abdullah Noaman, head of the Nasserist Unionist People's party, accused the Huthis of "arrogance" as he announced the end of talks.

Hadi tendered his resignation along with Prime Minister Khalid Bahah, saying he could not stay in office as the country was in "total deadlock".

The crisis had escalated on January 17 when the Huthis seized Hadi's chief of staff, Ahmed Awad bin Mubarak, in an apparent bid to extract changes to a draft constitution.

Pitched battles then erupted in the capital, with the Huthis seizing the presidential palace and firing on Hadi's residence in what authorities said was a coup attempt.

Obama was expected to raise the crisis in Yemen with King Salman, the new leader of Saudi Arabia, in a visit to the country on Tuesday, the White House said.