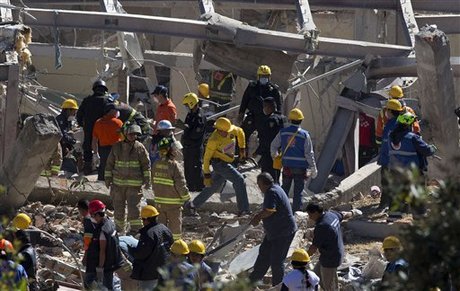 A gas truck blew up outside a maternity hospital in Mexico City on Thursday, killing at least two people, injuring dozens and trapping others after the building crumbled.

Rescuers with dogs scoured the rubble of the Maternity and Children's Hospital in the Cuajimalpa borough for people who were stuck following the huge blast, which rocked the neighborhood.

Officials gave various death tolls during the day, at one point reporting that four babies were killed, but Mexico City Mayor Miguel Angel Mancera said only two people were confirmed dead for now.

"One is a minor and the other a woman," Mayor Miguel Angel Mancera told a news conference, adding that 66 people were injured, including 22 in serious condition

The Red Cross said nine babies were taken to three hospitals in the capital.

Around three-quarters of the building collapsed after the blast, which took place at around 7:00 am after workers were unable to control a pipe leak, Mancera said.

Mancera told MVS Radio that the zone was evacuated "for safety because a lot of the people are babies in the crib area."

The newborn emergency care area was among those hit, said Adrian Rubalcava, president of Cuajimalpa borough. He said 100 people were in the building at the time of the tragedy.

The truck's three operators were detained, and two of them were in hospitalized, Mancera said. Their employer was identified as Nieto Express, which as serviced the city since 2007.

Neighbors recounted smelling a strong odor of gas and then hearing an explosion that shattered house windows and caused doors to slam open.

Adults with bloodied faces were rushed into ambulances. Relatives waited for news outside a security cordon and the smell of gas remained strong in the area.

"I'm waiting for information about my niece who gave birth yesterday (Wednesday)," said the woman's aunt, Martha Catellanos Nunez. "We are desperate. We know nothing."

Ivan Rodriguez, 28, said he was at home with his brother next to the hospital and thought an earthquake had hit the city.

"I went into the bathroom while my brother was sleeping. Suddenly I heard a big bang," he told AFP. "The house's doors opened as if they were kicked open and I shouted: 'Let's go, it's trembling!'"

An employee at a primary school said children were sent home after the explosion.

"It smelled like gas before the explosion," she said.

Mancera said firefighters were allowing the tanker fire to continue to empty the gas, and that it is under control.

President Enrique Pena Nieto expressed his "sadness and solidarity" with the victims and their families and said soldiers were deployed to help the search for survivors.

Pope Francis tweeted his condolences: "We pray for the victims of the explosion at the Cuajimalpa hospital, Mexico, and their relatives. May the Lord give them peace and strength."

Mexico has been hit by other gas explosion tragedies in recent years.

In February 2013, 37 people died in the headquarters of the state energy firm Pemex in Mexico City following a gas build-up in the skyscraper's basement.

In May 2013, 25 people died when a gas tanker's container came loose on a highway north of Mexico City, setting nearby homes and cars on fire.