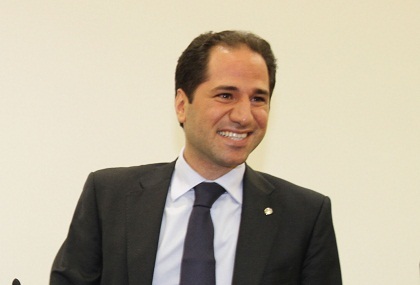 Kataeb chief Amin Gemayel will reportedly step down as head of his party, clearing the way for his son MP Sami Gemayel to succeed him despite objections by some members.

According to al-Akhbar newspaper published on Tuesday, some members warned that Sami's leadership of the Kataeb puts the party at enormous risks.

The daily said that Sami, who was the coordinator of the Kataeb Party's Central Committee, resigned from his post as a first step to lead the party.

Amin Gemayel is expected to announce his decision during the party's upcoming conference in July, which Kataeb is compelled to hold every four years in accordance to its by-laws.

However, several members of the party's poltiburo reject Amin's decision.

MP Nadim Gemayel, the son of former president-elect Bachir Gemayel (Amin's brother), told al-Akhbar newspaper, that they “will hold onto their stance in order to postpone the matter or avert it.”

Sami is known for his controversial stances and fiery statements that caused some trouble among the ranks of the Kataeb party.

Nadim pointed out that a “large number of the Kataeb members reject such a step as those who support Amin have fears over their positions in the future and others deem that the circumstances don't allow such move.”

“Every person knows his capabilities. It's not a battle between Sami and Nadim,” the young MP added.

Nadim expressed belief that “Sami's leadership to the party wouldn't safeguard the institution.”

However, Nadim told al-Akhbar that he is ready to cooperate with Sami “if he was positive and didn't exclude us from decision-making.”

“I am not against Sami,” he stressed.

Labor Minister Sejaan Qazzi, who is loyal to the Kataeb party, said that he supports Sami to head the party.

“He has the necessary requirements to lead the party,” the minister remarked.

Qazzi, however, noted that Amin didn't tackle the matter with the party members, pointing out it's a democratic process.

“If several reject Sami, then no one can impose him.”

Kateab is a family business ruled by the same Gemayel dynasty since 1936. This is by no means restricted to Kateabs alone, but goes into all the so called political parties in Lebanon.

He is not just corrupt, but also impotent. Like you pajama.

Nadim is too honest for Lebanese politic. It is why I am convince that he will never lead a political party in Lebanon.

"Qazzi, however, noted that Amin didn't tackle the matter with the party members, pointing out it's a democratic process."

A "democratic process" in which the leadership is transmitted by bloodline? Must be a Saudi democracy hahahaha

and they call this a democratic political party... How about free elections???
pathetic...

Or maybe do it the hezballah way, all lebanese party leaders would be anointed by the iranian ayatollah.

poor flamy in full nervous breakdown mode and no one can do anything to help.

This is why lebanon will never be a democracy, first Jumblatt is grooming his son then we have Aoun with his son inlaw , now Gemayel , who's next Berri ? Why can't we have people that are judged on their skills in leading the country if these people happened to be the best skilled after searching that will be ok but not just because they are related (by the way Saad harriri should never have been PM ) he could never lead Lebanon

Good luck Sami. May God help you negotiate the political mine field you are about to inherit!

what a shame this gemayel family. Nothing but filth. samy surely does not deserve this post which he will most probably acquire by inheritance, since the party is a family property. nevertheless, he seems much more capable and smart than his retarded cousin who has absolutely no skill except trying to imitate his father in posture, pictures and feed off his reputation and slogans even after they've become outdated and irrelevant. I'm ashamed to see such people with no credentials at all except having been bred by politicians, warlords etc.

firstly; the process is democratic. better to learn fact before we talk out of our rear end.
secondly the kenedys, the bushes and many others are iqta3iyeen also?
thirdly; the akhbar news paper is known for its lies.
lastly; MP Sami is worthy of the job

the problem with lebanese people is that every one speaks politics with ignorance. I wish they would read as much as they talk.this is the most honest MP in the republic