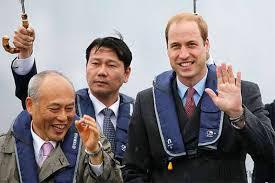 Britain's Prince William donned the trappings of feudal nobility in Japan Saturday, wearing the helmet and clothes of an ancient samurai during a tour of a TV studio.

The second-in-line to the British throne asked for a sword to complete the outfit, and grinned at photographers as he posed for pictures dressed as a warrior from yesteryear.

William, whose own military career saw him taking the controls of an ultra-modern helicopter, asked: "How does it look?"

"It really suits you," came the reply.

The dressing up session took place at the main studios of Japan's national broadcaster NHK, on the set of one of its popular long-running period dramas.

Earlier, he had been treated to a geisha show in which the ornately-attired women performed dances with fans and then sang traditional songs as they played "shamisen" -- a three-stringed instrument sometimes described as a Japanese banjo.

William, who has left his heavily pregnant wife, Kate, at home, tried his hand strumming the instrument, whose mastery remains a key skill for geisha.

The highly-trained entertainers learn to sing, dance and converse, with the cost of their company running up to thousands of dollars for an evening.

The British prince was presented with a huge bunch of flowers by popular actress Mao Inoue, who looked stunning in a simple kimono.

The visit to the set was a reminder of the pageantry and tradition in Japan, which at times outstrips that of even Britain's convention-bound royal family.

William later toured the newsroom at NHK, one of the world's biggest broadcasters, which has bureaus around the globe, and was told how the corporation had covered the earthquake, tsunami and nuclear disaster that struck Japan in 2011.

Motomiya is far enough from the crippled plant and was not designated as an evacuation zone following the nuclear accident, but the city has created the indoor facility for local children who have been encouraged not to play outside due to radiation fears.

The prince, accompanied by Prime Minister Shinzo Abe, was greeted by flag-waving small children and invited into the facility.

Toddlers there at first looked a bit puzzled by the royal visitor but soon started playing with the smiling prince, throwing small soft plastic balls to play with him.

The disaster claimed around 19,000 lives and left tens of thousands of people homeless.

Many of those displaced are still unable to return home, in some cases because of radiation that leaked from the crippled Fukushima nuclear plant, with scientists warning some areas may have to be abandoned.

William was to stay at a traditional "ryokan" inn in Fukushima, where Abe is expected to host a dinner.

Earlier on the day, a beaming William, 32, met well-wishers at a bookstore bestrewn with Union Jacks in west Tokyo, where he launched an exhibition showcasing British industry.

The young scion of the House of Windsor is immensely popular in Japan, where people speak of his warmth and his easy manner with members of the public.

That familiarity stands in marked contrast to Japan's own imperial family, who are seen as austere and far removed from their people, and whose own carefully choreographed interactions with crowds frequently look awkward.

"We were really close to him," said engineer Takeshi Miyagake, who had gone to meet the Duke of Cambridge at the bookshop.

"We never have the opportunity to get this close to members of the imperial family."

On Friday, the second day of a four-day tour of Japan, William had met with the ageing Emperor Akihito and Empress Michiko, where his youth and vigour stood in marked contrast to the increasingly frail-looking couple.

He also had tea with Crown Prince Naruhito, a man who, like him, is one day destined to rule his country.

Japan's media has closely followed the royal visit, with many outlets using it as an opportunity to re-broadcast footage of William's mother, the late Diana, during her trips to Tokyo.

The Princess of Wales was wildly popular in Japan, with her visits setting off so-called "Diana Fever" as tens of thousands flocked to meet her and as women sought to copy her carefully-coiffured hair and stylish dress sense.

On Sunday he will meet people whose lives were affected by the 2011 earthquake and tsunami, including the staff of a newspaper who produced handwritten copies in the aftermath of the disaster because their printing presses had been destroyed.

He is due to leave Japan on Sunday, bound for Beijing.