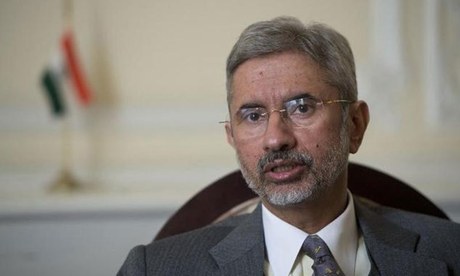 Pakistan and India held their first high-level talks for nearly a year on Tuesday, with a senior Indian diplomat hailing the meeting in Islamabad as "positive and constructive".

Indian Foreign Secretary Subrahmanyam Jaishankar is visiting Pakistan for the first senior-level dialogue between the nuclear-armed rivals since their prime ministers met in New Delhi last May.

Relations between the two countries, always fraught, soured further last August amid increased firing along their borders and a row over a Pakistani diplomat meeting Kashmiri separatists.

"We agreed to work together to find common ground and narrow our differences," he told reporters.

"I reiterated our known concerns on cross-border terrorism including on the Mumbai (attacks). We agreed that ensuring peace and tranquility on the border was vital."

The attacks on Mumbai in 2008, blamed on Pakistan-based militants, have been a perennial thorn in relations in recent years.

India has been infuriated at Pakistan's failure to either extradite or prosecute effectively the alleged masterminds of the carnage, which left 166 people dead.

Jaishankar's trip is part of a tour that also includes Bhutan, Bangladesh and Afghanistan. But Pakistan-India issues, which tend to dominate regional politics, were clearly prominent on the agenda.

He is also due to meet Prime Minister Nawaz Sharif as well as the de facto foreign minister Sartaj Aziz, according to Pakistani state media.

But India abruptly canceled a planned round of dialogue between foreign secretaries in Delhi in August after Pakistan's high commissioner met Kashmiri separatists.

The meeting with pro-independence leaders in the Indian-administered part of the disputed Himalayan territory infuriated New Delhi but Pakistan defended it as a "longstanding practice".

Pakistan and India, who have fought two of their three wars over Kashmir, have traded blame for an upsurge in firing and shelling which started in October.

Both Modi and Sharif attended a summit of the South Asian Association for Regional Cooperation bloc in November but did not hold one-on-one talks.

The cricket World Cup brought an unexpected opportunity for a thaw, with Modi phoning Sharif last month to wish his team well in the tournament.