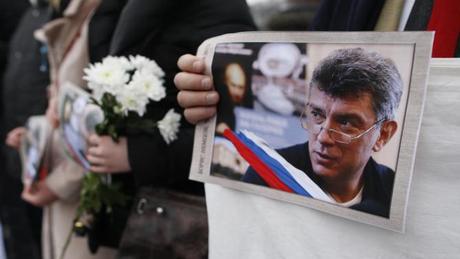 Thousands of mourners turned out Tuesday to pay a last homage to slain Russian opposition leader Boris Nemtsov, gunned down near the Kremlin in the most stunning assassination of Vladimir Putin's rule.

Crowds thronged the Russian capital to mourn the 55-year-old former deputy prime minister, a longtime Putin critic and anti-corruption crusader who was laid to rest at a Moscow cemetery.

The funeral caused a fresh spat between Russia and the European Union, which condemned what it called "arbitrary" bans after Russia blocked prominent figures from Poland and Latvia from attending.

Russian opposition leader Alexei Navalny was also unable to attend as he is behind bars, but speaking from jail he accused "the country's political leadership" of ordering a hit on Nemtsov.

Putin himself has branded the killing a provocation and his spokesman said of Navalny's charge: "I am not going to comment on such lunacy."

Moscow has pledged a full investigation as speculation swirls about who was behind the assassination.

As Bach's St Matthew Passion played, well-wishers filed past the flower-covered coffin, many crossing themselves and weeping.

Nemtsov's mother Dina Eidman, who turned 87 on Tuesday, his children, widow, and former partners and friends stood by the casket.

Putin, who was hosting the authoritarian leader of Belarus, Alexander Lukashenko, did not attend the funeral at Moscow's prestigious Troekurovskoe cemetery.

In Berlin, German Chancellor Angela Merkel reiterated calls for the perpetrators to be brought to justice.

"And I hope -- and we will work toward this -- that those who think differently in Russia have an opportunity to articulate their thoughts, although I know that this is anything but easy," she said.

Many mourners blamed Putin for the murder, saying the Kremlin -- locked in a bitter confrontation with the West over the Ukraine conflict -- whipped up hatred against dissenters.

"We came because we feel ashamed of our country, of our people, that we let such a thing happen," said one mourners, Dmitry Afanasyev.

A journalist and Nemtsov ally, Vladimir Kara-Murza, wept as he said friends had sought to convince the politician to leave the country but he had refused.

"We witnessed how bullets had turned into arguments in a dispute with opponents," Kudrin said at the coffin. "Boris, we are with you."

Navalny pointed the finger at Putin in a strongly-worded statement posted on his blog.

"I believe that Nemtsov was killed by members of a government (special services) or pro-government organization on the orders of the country's political leadership (including Vladimir Putin)."

Nemtsov, who served in Boris Yeltsin's government in the 1990s, was gunned down shortly before midnight Friday while walking across a bridge just a short distance from the Kremlin with his Ukrainian model girlfriend Ganna Duritska.

Putin, whose rule has seen the steady suppression of independent media and opposition parties, promised an all-out effort to catch the killers.

Friends said Nemtsov had been working on a report containing what he described as proof of Russian military involvement in the bloody uprising by pro-Moscow militias in eastern Ukraine.

A posthumous award, the Order of Freedom, was bestowed on Nemtsov by Ukrainian President Petro Poroshenko.

"For we Ukrainians, Boris will forever remain a Russian patriot and a friend of Ukraine," he said. "He proved with his life that one can be both."

Polish parliamentarians in a resolution said they shared "the grief and sadness of the family, friends and all those who hold close the ideals of freedom, democracy and peace."

Nemtsov's 23-girlfriend Duritska, who was by his side Friday but was unhurt and is the chief witness in the murder, has been allowed to return to Kiev.

Investigators said Tuesday that Duritska "could know some circumstances that have significance." Investigators were also searching the Moskva River under the bridge where Nemtsov was killed.

Investigators have floated several possible motives, including that Nemtsov might have been a "sacrificial victim" to sow instability.

The murder took place in Russia's most heavily policed area, near the Kremlin walls.

Some observers have suggested that low-level criminals, not professional hit men, may have carried out the killing.

Since Putin came to power in 2000, a string of prominent opposition figures have been murdered including journalist Anna Politkovskaya and activist Natalya Estemirova.

On Sunday, tens of thousands of people joined a memorial march in Moscow, numbers not seen at opposition rallies since anti-Putin demonstrations in 2011 and 2012.