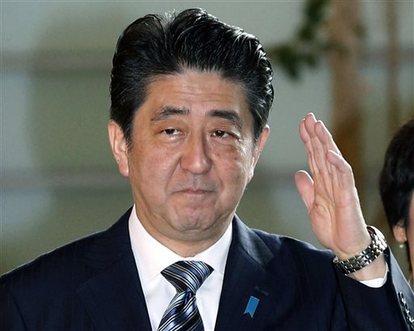 Abe, who swept to power in late 2012 on a ticket to revive the economy, told parliament he "didn't know" that two firms had given money to the Liberal Democratic Party within a year of receiving government subsidies  -- a violation of strict political funding laws.

The comments followed reports Tuesday in the Tokyo Shimbun and conservative Sankei newspaper, which said the  chemical companies gave a combined 620,000 yen ($5,200) to a local party office in Abe's constituency in 2012 and 2013.

Before Abe's comments, his chief spokesman Yoshihide Suga told reporters that the 60-year-old Abe "would study the issue and, after that, I believe he will deal with it properly".

Japan's political funding laws ban firms from making a donation within a year of being notified that they will receive public money. But the legislation also says politicians must know about the subsidies, which Abe denies.

Nishikawa has admitted receiving a one million yen donation from a company run by a sugar manufacturers' group months after the farm ministry decided to grant a 1.3 billion yen subsidy to the group.

The donation was seen as particularly controversial since sugar is one of the most contentious items in negotiations over the Trans-Pacific Partnership, a 12-nation trade deal that includes the United States and Japan.

In Abe's previous cabinet, two female ministers resigned last year over allegations that they had misspent money in what opponents insisted was an attempt to buy votes.

Money scandals are not uncommon in Japan, where pork barrel politics reigns and rules on spending tend to be slightly opaque -- barring little except explicit bribery and vote-buying.