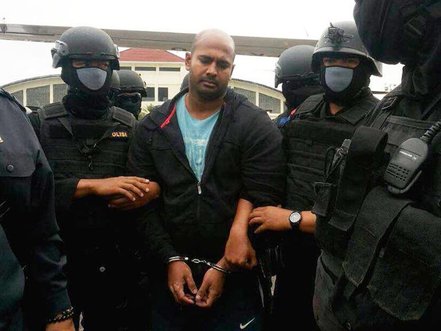 Indonesia on Thursday rejected the offer of a prisoner swap proposed by Canberra in an 11th-hour bid to save two Australian drug smugglers facing execution, saying it is determined to put to death those "who have poisoned our nation".

Andrew Chan and Myuran Sukumaran, the ringleaders of the so-called "Bali Nine" drug trafficking gang, could be shot within days after being moved on Wednesday to the Indonesian island where they are due to face a firing squad.

They are among a group of drug convicts, including foreigners from France, Brazil, the Philippines, Nigeria and Ghana, who are expected to be executed at the same time in the near future on the prison island.

Authorities must give convicts 72 hours' notice before they are executed and in a last-ditch effort to save them Foreign Minister Julie Bishop proposed a prisoner swap.

She said she had spoken to her counterpart Retno Marsudi in what was reportedly "a very tense phone call".

"I've spoken to her on a number of occasions about this, and I wanted to explore any other avenues or opportunities to save the lives of these two young men who have been so remarkably rehabilitated," Bishop told ABC radio.

However, Indonesia's Attorney-General Muhammad Prasetyo insisted the executions would go ahead and that the offer from Australia was "not relevant".

"Are you willing for people who have poisoned our nation to be exchanged?" he said.

"That has never been carried out, and never thought of."

President Joko Widodo confirmed that the offer of a swap had been rejected, insisting on "the sovereignty of the law" in Indonesia.

He has been a vocal supporter of the death penalty for drug traffickers, claiming that Indonesia is facing an "emergency" due to rising narcotics use.

The Australians, in their early 30s, were sentenced to death in 2006 for trying to smuggle heroin out of Indonesia. They recently lost their appeals for presidential clemency, typically the final chance to avoid the firing squad.

The others facing imminent execution also lost their clemency appeals in recent months.

Relatives of the French convict, Serge Atlaoui, and the Brazilian, Rodrigo Gularte, visited them Thursday on Nusakambangan, dashing past a scrum of waiting journalists before boarding a boat to make the crossing to the prison island off Java.

Ursa Supit, an anti-death penalty campaigner who met Thursday with a Nigerian death row prisoner being held next to Chan and Sukumaran, said the Australians were alone in separate cells and could only communicate through the walls.

"They sounded fine, but they have nothing because they had to leave all their stuff in Bali," Supit said, adding she herself did not meet the Australians but the Nigerian had been communicating with them.

As well as Australia, Brazil and France have piled pressure on Jakarta, with Paris summoning Indonesia's envoy and the Brazilian president refusing to accept the credentials of the new Indonesian ambassador.

Nigeria added its voice to the growing concern, with foreign ministry spokesman Ogbole Amedu Ode saying that the country's ambassador to Jakarta was Thursday due to appeal to the Indonesian foreign minister.

Early Thursday, an impromptu bipartisan candlelight vigil for the Australians was held outside the country's parliament in Canberra, which was attended by Prime Minister Tony Abbott.

Canberra has made more than 20 representations to Indonesian officials since January regarding the pair but Widodo has been unswayed.

Bishop warned Chan and Sukumaran's execution would have implications, not just in Australia but globally.

"Of course, I'm deeply concerned about the impact of these executions not just on the Australian relationship with Indonesia but on Indonesia's reputation worldwide," she said.

"The movement against the death penalty is very strong."