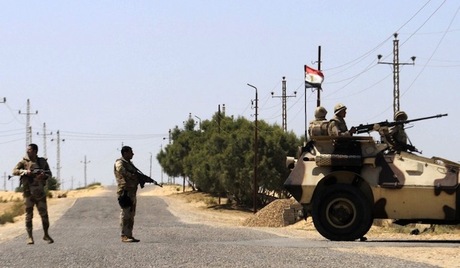 Two bombings in Egypt's Sinai Peninsula, one of them a suicide attack on a police base, killed a civilian and an army officer Tuesday as an Islamist insurgency showed no let-up, officials said.

The rugged peninsula is the base of the Islamic State group's Egyptian affiliate, formerly known as Ansar Beit al-Maqdis (Partisans of Jerusalem), which has claimed the majority of attacks on the security forces in the region.

The suicide bomber rammed a vehicle packed with explosives into the police base in North Sinai's provincial capital of El-Arish, killing the civilian, security and health officials said.

Two civilians and 30 police were also wounded in the attack, which came just minutes after a nighttime curfew was lifted at 6:00 am (0400 GMT).

"The bomber drove a water tanker filled with explosives into the rear gate of the base," a security official said.

"As the vehicle approached, police fired on it, detonating the explosives inside."

Interior ministry spokesman Hani Abdel Latif said the death toll could have been much higher but for the swift reaction of the guards on the gate.

"The security forces dealt with the vehicle near the checkpoint of the base which saved a lot of lives," Abdel Latif told AFP.

"The wounded policemen suffered only minor injuries from shattered glass."

In the second attack, an army captain was killed and two other soldiers wounded when a roadside bomb blew up as they pursued militants south of El-Arish.

Tuesday's bombings came a day after three Egyptian soldiers were killed by a roadside bomb east of the city.

In January, a combined rocket and car bomb attack on a military base, a nearby police headquarters and a residential complex for army and police officers killed at least 24 people in the city, most of them soldiers.

The nighttime curfew is among a raft of security measures that have been in force in North Sinai since a late October attack on a military base near the city killed 30 soldiers.

The army has also been clearing a buffer zone along the province's border with the Gaza Strip to prevent militants infiltrating from Palestinian territory.

Militants have intensified their attacks on the security forces in the Sinai since the army overthrew Islamist president Mohamed Morsi in July 2013.

They say their campaign of violence is in retaliation for a government crackdown on Morsi's supporters that has left hundreds dead and thousands imprisoned.

The army reports daily clashes with the militants in North Sinai.